The first two episodes of the Clone Wars CGI series have shown. I'm actually pretty fond of it so far on a pure enjoyment level. I find that I'm really liking the theme, which (until it hits the BSG-drum-ized SW fanfare) has a really nifty sound.

- We get to see the small Republic vessel from TPM again, which is a very nice nod to continuity. The vessel is not especially nimble, it seems, but does the job. It has four four-meter-wide cylindrical escape pods which, given the floorspace, might be able to hold a dozen people. It looks designed for four, though, implying a likely crew of sixteen or less.

- Two Separatist warships drop out of hyperspace right on top of the small Republic cruiser. These are referred to in the non-canon as Munificent class and said to be 825 meters in length. Gunnery aboard these vessels appears to be handled by your basic retarded battle droids.

- Range on these ships is as limited as it always is in Star Wars. Just as the CW CGI movie gave us ships lined up within spitting distance, we hear it pretty explicitly this time. Right after this moment, the clones report they they are out of range of the Munificents: 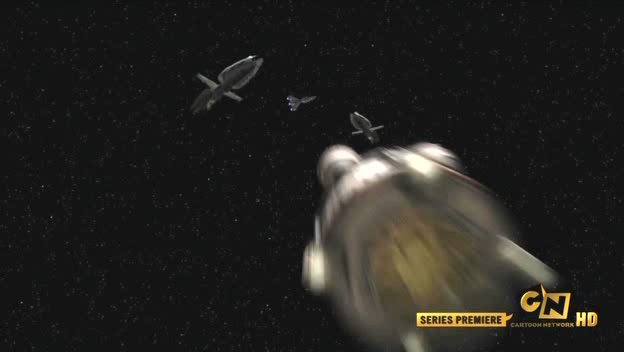 The Munificents had actually already stopped firing by this point, despite their intense desire to destroy the pod: 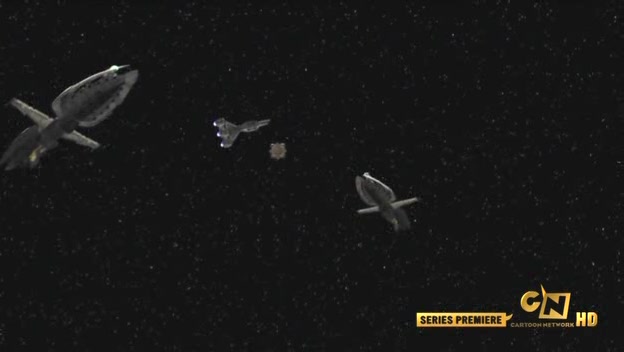 Similarly, in the second episode we get to see another space combat incident. A Separatist warship and a small Republic force square off, holding position outside one another's weapons range: 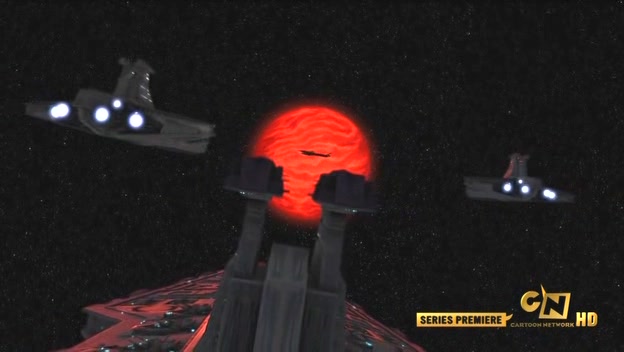 Then, shortly before the Separatist warship is reported as beginning to close with the Republic ships, we see this: 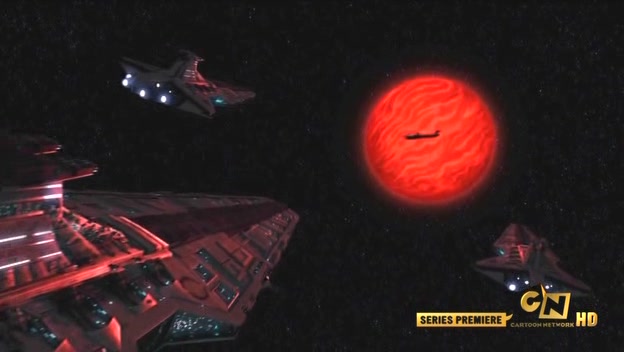 That skinny shadow against the red dwarf is the Separatist warship Malevolence, estimated at SDN to be around two to three kilometers in length, meaning we are not terribly far from it in the above shots, probably less than a hundred kilometers.

When the Separatist warship prepares to fire its funky ion cannon superweapon thingy, the Jedi Plo Koon aboard one of the Republic Venators orders the ship to fire. The clone officer replies that they are "not in range yet".

So even against another large warship, their range is on the order of 100 kilometers.

- Clones from the above-mentioned Republic ships were able to operate for a brief time in a low pressure environment (definitely not a vacuum given the light refraction from droid and vessel headlights, but enough to result in death within seconds (with multiple lungfuls of screaming) for unprotected clone officers). The medical droid that looked them over later said that the "pressure suits" provided "some protection" against the effects, but the Clones were obviously not feeling well. The medical droid said they'd need a medical frigate for full recovery. The Jedi Plo Koon also said and demonstrated he was able to "withstand the pressure" for a brief time.

Barring some special and not-mentioned difference between the Clone armor in this instance and regular clone armor, it seems that Clone armor does have limited sealing capability. Whether this applies to later Stormtrooper armor is unclear . . . given the usual capacity to see skin, I would assume that if Stormtrooper armor has such capabilities it requires some sort of extra equipment or special preparation.

- Both clones and especially droids are again shown to be extraordinarily awful shots. Two clones and a batch of droids do battle at a range of less than ten meters . . . the droids probably fired fifty times and hit nothing. One droid fired for several seconds, first hitting a rock and then firing constantly about a foot to the left of a clone.

The clones were victorious, but they probably fired three or four times as many shots as there were droids to shoot at.

- Clones are seen to have a rocket launcher and grenades. The rocket launcher is actually fairly powerful, dislodging and cracking up a large rock feature which then smushed several destroyer droids.

More to come if I see anything noteworthy.

- Venator class Republic ships are
apparently built like clown-cars . . . three of them can put out a
huge-mongous amount of debris, enough to act basically like the
asteroid belt from TESB. This despite there being parts of them --
large enough to be recognizable as Venator sections -- also visible.

-
An SDN post reminded me about the Separatist warship picking up an
active medical droid when all the other systems on a hiding ship were
down to evade detection.

"We're picking up a faint signal," says a battle droid, "from a droid. Not one of ours. They're right behind us."

It isn't clear what the signal was.

The
SDN commenter claimed that this case was evidence of detecting a
droid's power emissions and then determining (from them or via a deeper
scan) that the droid was not of the battle droid models. While
possible in context, it seems off given that the Separatists couldn't
find the escape pods with their working comm systems.

What seems more likely was that this was the droid's equivalent of a Bluetooth connection to the ship.
Posted by Author at 8:11:00 AM

"Clones shown to be extraordinarily awful shots?" I assume these were the same troopers cloned from Jango Fett, who had extraordinary aim-- and his clones seemed quite adept in the movies as well.
--Tulkas

Actually, I don't think Jango demonstrated extraordinary aim at all, not from what I'm remembering. In fact, unless I'm forgetting a scene or two, the only time he actually HIT anything that wasn't point-blank range was when he poison-darted the other bounty hunter, and in the arena battle against Jedi Knights whose defenses were already overwhelmed by the massed droid army (and who were largely stationary at the time Jango fired). -I- could have made that shot with the poison dart, given a little range practice to get a feel for the weapon, and while I consider myself a decent shot, I'm no expert marksman. Now granted, relative to the atrocious accuracy demonstrated by the clones, the stormtroopers, and especially the droid army, he's a pretty decent shot, but by realistic standards, his accuracy is nothing to write home about. Further, there's no indication that the full level of his marksmanship skills (what skills he has) are perfectly transfered through the cloning process - indeed, based on the demonstrated accuracy of clone troopers during the war at any range beyond point-blank-range, it would appear that any such outstanding marksmanship Jango may have had did NOT transfer through the cloning process.

He wasn't only able to hit the bounty-hunter with the poison dart, but dead in the neck, at what looked to be over a hundred yards, while the two Jedi were bending over her; that's quite a shot, in the SW universe.
Likewise in the arena, he was able to shoot that dinosaur-beast dead with one shot, even after he was trampled by it, and when it was charging straight at him. He was also able to shoot the Jedi dead.
Also his piloting and fighting-skills (at least while wearing his armor) were as good or better even than Obi-wan's, so his genetic potential was certainly well-chosen by Tyrannus (Dooku).

Likewise the clone stormtroopers seemed to be fairly accurate against the droids.

As for the cloning-process, their eyesight, hand-eye coordination, intelligence, piloting-ability and other bounty-hunting skills should have transferred fairly well; again, Jango Fett was recruited by Dooku for his genetic potential, so these traits should have been quite formidable.
The "alterations" to the clones-- making them 100% obedient, growth-acceleration, etc, might have reduced their potential somewhat, however again their apparent lack of marksmanship against the droid-army might have been due to the use of suppression-fire; likewise, a battle fought simply at great distances by snipers, isn't very screen-worthy; even modern-era snipers can kill from a mile's distance with simple rifles.
--Tulkas

If you'd seen the show scenes I refer to, you'd never claim consistently good trooper accuracy. Indeed, the claim is rather tenuous anyway just from the films.

Hitting a target at 100-200 yards is easy if you have even a simple, half-decent scope, and a rifle made at any time within the last 100 years. Being a professional bounty hunter, I'm sure Jango Fett could afford a scope for his dart gun that is at least on the same standard as a modern high-end precision rifle scope, as used by rich sport hunters, US Army and Marine Corps. snipers, and paranoid militant survalists across the country, if not much better than even that due to the generally superior technology of the SW universe. Now, if he had made the shot with iron sights, I'd say he was a skilled marksman (and yes, a highly skilled marksman COULD have made such a shot without a scope), but I'm pretty sure he had some sort of scope or electronic sighting system mounted on his dart gun.

As for the Jedi, they were standing still, not very far away, and they were distracted, so it wasn't a very outstanding piece of marksmanship.

I will grant that the hit to the beast thing wasn't bad, but again, with a steady hand, it's not that impressive a shot - what makes it impressive is that he was able to do it while the thing was charging right at him, and that he didn't flinch or waver. The guy's obviously got balls, though, so that's not surprising in the least.

Now, as I said before, for the SW universe that's some fairly impressive marksmen, especially if you're gonna bring the droid army into the equation, but by modern standards, or Trek standards, it's not.