Here we have a Trek materials post, with thanks to Chakoteya, coming from "Blood Oath"[DSN2]:

KOLOTH: Ah, a warrior's configuration. Now what are you going to do with it?

Note the weight given there.  Unless Koloth was practicing in a high-g environment and Dax was doing the math in her head (not obviously the case), we can assume that is the mass.  So the traditional Klingon sword of honor masses 5.3 kilograms, or over 11.5 pounds.

That's pretty crazy.  Crazier still is how far I'm about to take that.


Medieval swords are often thought of as enormous heavy things ... I am reminded of the scene in a Crichton time travel novel (Timeline) wherein a character is amazed at how quickly they were swinging the big, heavy swords in the time of their use, rather than the slow-motion combat he expected.  There have also been assorted movies and shows depicting the katana as a faster sword due to its light weight.

But the truth is, European swords weren't that heavy.  Ceremonial swords could be massive, but, generally speaking, fighting swords were not significantly heavier than the ~1.2kg katana.  Per J. Clements:


"Medieval swords in general were well-made, light, agile fighting weapons equally capable of delivering dismembering cuts or cleaving deep cavities into the body. They were far from the clumsy, heavy things they're often portrayed as in popular media and far, far more than a mere "club with edges." As another source on arms affirmed: "the sword was, in fact, surprisingly light·.the average weight of swords from the 10th to the 15th centuries was 1.3 kg, while in the 16th century it was 0.9 kg. Even the heavier bastard swords which were used only by second-grade fighting men did not exceed 1.6 kg, while the horse swords known as 'hand-and-a-half' swords weighed 1.8 kg on average. When due allowances are made, these surprisingly low figures also hold good for the enormous two-hand sword, which was traditionally only wielded by 'true Hercules.' Yet it seldom weighed more than 3 kg." (Funcken, Arms, Part 3, p. 26).

Starting in the 16th century there were of course special parade or bearing swords that did weigh up to 8 or 9 pounds and more, however these monstrous show pieces were not fighting weapons and there is no evidence they were ever intended for use in any type of combat. Indeed, it would not make sense given that there were other far more maneuverable combat models available which were several pounds lighter."

In short, then, a 5.3kg bat'leth is amazingly heavy for a sword.

To be sure, there's a lot more to a bat'leth than in a normal sword.  You can basically imagine a bat'leth as a ladder composed of two swords joined together by metal rungs.  Even then, however, it's still heavy.

Getting a volume for a bat'leth sounds like a very tricky proposition.  The width is critical, though there is no indication of significant girth for the metal portion.  Based on this TrekCore cap it seems to be a simple design ... basically flat but for the sharpened parts and grip material ... but still not something I want to model.  (I don't want to model anything, really.)

We can look to fan replicas, but, alas, many so-called replicas vary greatly in style both between themselves and as compared to what was observed on-screen.

Just perusing the steel replicas with listed weights, though, we find this one on Amazon with a shipping weight of 7.6 pounds (3.44 kg) and this one weighing in at 2.29 kilograms, or somewhat less.  There are some higher reported shipping weights for similar models, but higher shipping cost is considered profit to some online.  And in any case, those lack the proper curvature.

A better version I have found is this guy's ... it looks to be less graceful in design than the screen version (i.e. more metal area as seen from above), but still looks awesome.  I don't know the thickness, but in any case he suggests an average 4kg weight on another general info Etsy post covering his assorted bat'leth designs, and notes his use of 1/8th inch steel.  Still, his 'normal' bat'leth has something like 20% more metal than the screen version.

That led me to find a perfect-looking one being made.  The weight is given as 6.26 pounds, or 2.83 kilograms ... a little over half the weight of Dax's warrior's configuration.  That initial one was to be made of 3/16ths inch carbon steel, though he was aiming to match the weight later and bumped up the thickness to 1/4.  I'm not sure about his weight estimate, however, and there is no indication he ever finished it or weighed the final version.  I assume the weight was a guess.

This led me to some better resources, like the amazing article from 1996.  Oddly, he estimates the steel weight at 20 pounds, which I assume to be an unscientific overestimate.  However, he does eyeball the screen weapon as being 1/4" wide, and indeed the Roddenberry.com aluminum replica matches this figure.

Finally, I found a good bat'leth model for 3D printing.  It is too thick and has a bit more metal in places, but converted to 3DS by this guy and imported to SketchUp, the thickness issue was easily resolved. At a length of 116 centimeters and a thickness of 1/4 inch, the bat'leth looks pretty good alongside this guy's shades, even at the ~45 degree view angle above.   SketchUp curiously refuses to show the decimal point in the model template used in the image above, just as it insists on fractional inch measures only down to 16ths of an inch.  Suffice it to say I confirmed the thickness was enough by using the smallest scale reported as 1/4 inch, then went to the millimeter template and confirmed I could scale it down to 96% and still have it say 6mm.  I then scaled up to 103% and found it saying 7mm at that point.  I then parked it at 99%.  That is as close to 6.37mm (a more exact figure for 1/4 inch) as I could get.

The result?  The unsharpened bat'leth came out to 606 cubic centimeters. 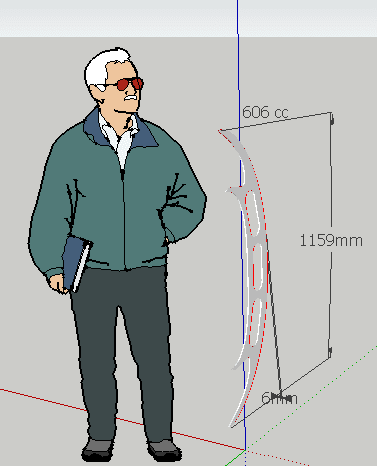 That's actually lower than I had initially assumed.   In my head, I had basically taken a big honking sword and a medium sword and mated them to come up with a rough doubling of regular swords, or about 3.5 kg ... meaning I was expecting the density of baakonite to probably hit north of 12,000, at least.  Instead, we're only at around 10% more dense than steel.

Even if we shave 10% off the volume for sharpening and polishing of the 1/4-inch stock used for the prop, as well as the bits of extra metal around the outer rungs, we only shift the density up to 10,000.  I'd say some compromise between the two is probably the most fair and accurate, so if you put me on the spot I'd wager a true density of 9,250 kg/m^3 or thereabouts.

Unlike a lightsaber, the bat'leth doesn't seem to be able to cut with impunity.  See, when Worf kills Duras, he does so with this powerful overhead axe-chop move.  And yet, when we see Duras with the bat'leth sticking out, only a relatively small portion of the outer point is embedded in him.  In other words, for such a swing, he only got about a Ka-Bar's worth of metal into Duras.

When I first saw that 20+ years ago, I felt like that swing should've stapled Duras to the floor with half a handgrip sticking out.  It probably could've, had that been dirt under Duras.   But presumably, the deckplate stopped it completely.

It seems safe to assume that the bat'leth blade edge is amazingly hard, and with the high density baakonite it carries a lot of momentum.  Certain scenes with rubber stunt blades could be used to argue for a nice flexibility, as well, but I'm not sure how far we should take that.

Opinions differ wildly as to the utility of a bat'leth in combat against a sword, and I am not going to venture an opinion.  In-universe, Worf's bat'leth beats a katana-like sword as wielded by Duras.  But of course, plot invariably beats logic.

In Texas, a group of Klingondom aficionadoes have taken the SCA/LARP thing of costuming and faux combat with padded-pipe swords into the 24th Century, or therabouts.

In this page of tips on how to build a faux bat'leth, it is noted that their early efforts looked good but were neither durable nor heavy enough, and that they later went for more weight.   This seems borne out by the fast combat with good-looking bat'leths as seen in this 2002 video versus this slower combat with much less beautiful blades from six years later.

Klingon bat'leths are quite heavy for swords, but the material they are composed of is seemingly not that much more dense than steel.  Baakonite seems to have a density of around 9,250 kg/m^3, and the use in so large a blade as the bat'leth seems a properly Klingon thing.  As with real swords, the weight is a compromise between having maneuverability and having momentum for cutting.

Presumably, Jadzia would commonly have preferred a lighter bat'leth, especially against so aged an opponent as Koloth, but chose the full-mass version to impress him with her general skill.

Also, as far as any question of lightsaber versus bat'leth, the lightsaber might be able to cut it (though note that they did bounce off steel handrails at times in the OT), but there's the danger of an uncontrolled half-bat'leth still flying your way.  Fortunately, though, the uncontrolled half-Klingon behind it will likely just fall straight down.

One thing the bat'leth is not is a super-sci-fi bladed weapon.  Given some of the extreme material densities in Trek, one can imagine a supremely hard, durable, and even semi-flexible blade of more than sufficent weight that appears improbably, perhaps even impossibly thin.  A super-thin (to the point of being semi-transparent) blade would be awesome, for instance.   Lightsaber, indeed.

Instead, this is a traditional bladed weapon from a 'unique' culture.

http://startrekpropcollector.com/trekauctions/page.pl?p=iaw/page192.html ... a rubber prop was 40.5 inches long, 17 wide, and about an inch deep. Based on the pic the inch was at least partially due to separation of the rubber. Just noting one of a different size.

Hey! This is my first comment here so I just wanted to give a quick shout out and say I
truly enjoy reading through your articles. Can you recommend
any other blogs/websites/forums that deal with the same
topics? Thanks a lot!