Another SciFights oddity, still on the phasers versus tanks stuff, with a little fun about how Brian Young fancies himself the only person to have ever gazed upon a firearm in real life.

In fairness, this is probably at least partially true given the number of Californians, Europeans, and other undesirables involved in the debates.  (Just kidding, Europe. I'd never insult you by comparing you to California.)  But while I am sure he's probably a better long-range shot than I am, the simple fact is that he is no more a firearms expert than I am.


Young's been trying to hammer the point that a pistol is incapable of accurate long-range work.  In reference to modern weaponry, I agree completely.   The problem is that he's trying to shoehorn phasers into that same box in order to make them suck against WW2 tanks, and they just don't fit.

First, let's give his point a fair hearing in regards to what I believe is an old Charter Off-Duty snub-nose .38 revolver:

As you can clearly see, the old school not-even-adjustable iron sights are designed for close-in work.  It is a modern-ish pistol, after all, so for folks like myself Brian has simply demonstrated the obvious.   (Indeed, I'd have compared the button on the flashlight to many a shotgun's simple bead at the end of the barrel (for those of you who don't have tacti-cool ghost rings on your 590 or the little light-catching fiber optic doodads), but he doesn't make that note.)

I will say that Young's choices of focus and aim are a bit noteworthy.  As a rule, it is suggested that pistol shooters should focus on the front sight and not the target.  Of course, this is contrary to natural instinct, just like closing one eye while facing a threat.  But also, if you focus on the threat, the front sight spreads out in the blur, whereas focusing on the front sight lets the target blur.  Also, most pistols of my acquaintance are designed so that the top of the sights are placed level with the target rather than the center of the sights on top of it, which would negate the total-target-covering he demonstrates.  This page has good images demonstrating both ideas.  But, some guns are designed to be aimed as Young does, which is presumably why he chose it.   Even if there was ignorance or deceptiveness involved, though, the general point he was trying to make can be said to stand insofar as pistol iron sights not being a good choice for long-range shooting.

And, we get the bonus of it being a wheelgun so he doesn't get to discuss the magazine, which he invariably calls a clip (even in reference to phasers).

In any case, his problem comes when he tries to extrapolate to Trek technology.   (I, for one, have never seen "CHARTER ARMS" emblazoned on a phaser.)   Let's observe the problems:

1.   Recall, if you will, that phasers have consistently demonstrated off-axis, on-target fire, with one Cdr. William T. Riker my favorite whipping boy on that topic, even if Data outdoes him in the pic below:

No modern pistol slings a bullet out of the barrel in a direction other than pretty much straight ahead.  This suggests that the phaser doesn't have iron sights because it doesn't need them.  Brian presumes that it must therefore have no sighting system at all.

Many years ago I suggested an optical tracking system as the most likely method, so the phaser 'knows' what you are looking at.  We can already do this with a little strip on a monitor, and Samsung wants to get it down to mobile size to enhance their current face-tilt-tracking ... I am quite confident it can be miniaturized for phasers.

2.  Recall also, as noted recently, that phasers have demonstrated remarkable beam steadiness even when held at arm's length, single-handed, on continuous fire, such as for cutting.  Also, the Type III phaser rifle was once specifically noted as being gyro-stabilized.

As Brian demonstrates, a mere unaided mortal can't even hold a snub-nose pistol that rock-steady on a simple rest.  I had already noted that closer range with a laser pointer can more readily show one the difficulty.  However, Brian rejects the idea of gyroscopic stabilization on the smaller phasers.

This is odd since we can gyro-stabilize a little GoPro and make it into a SteadiCam with a device not terribly much larger than a TNG Dustbuster.

3.  Ponder this:  we already have rifles that n00bs can shoot to 1200 yards.  The trick is a highly computerized electronic scope with rangefinding and other sensors, and an onboard ARM-proc-powered ballistic computer running Linux.  ARM processors are the same sort of thing you'd find in a Raspberry Pi and other wee computing devices like old Windows Mobile iPAQs.  You zoom in and tag the target, then pull the trigger and wait a few seconds for the rifle itself to take the shot.

4.  Brian seems unaware that the old Phaser One had a pop-up sight, and the Phaser Two chassis had a window for it.  Here is Kirk using it in "The Man Trap", along with a closer shot of it deployed on a Phaser One: 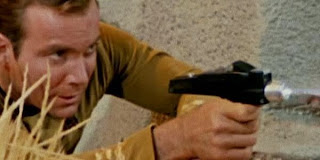 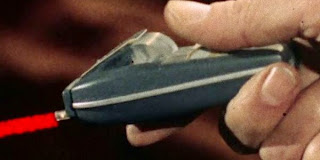 We can't see what the user saw, unfortunately.   We also haven't seen such a thing on TNG phasers, but I find it hard to believe that such a capability no longer exists unless replaced by something different, if even some sort of tricorder link.   Again, recall that Data makes fun of weapons only accurate to 100 meters, while Young has returned to claiming 100 meters as maximum effective phaser range (after previously allowing himself to be argued up to 200).


So taken all together, what exactly is the point of commonality that leads Young to shoehorn phasers into a modern revolver's box?  It's like shoehorning pistols into a knife box, or maybe a slingshot's.

In other words, how long until you can go buy a gyro-stabilized pistol with eye-tracking target acquisition?  Just wait.

Take the amazing modern tech above and apply it to known phaser capabilities, and it makes sense and has explanatory power… certainly more explanatory power than Young's assertions that phasers have nothing and hit via pure unadulterated miracle.

Here is my thought as to the UI.  When the trigger is pressed it shoots where you are looking, and stays pointing the same direction unless you move your hand.  This explains the semi-auto nature of most shots we see and has other explanatory benefits, besides.  Brian's claims have none.

Oh, and one more thing.

He argues that Han's blaster has a scope on it based on the presence of an upper tubular object attached to the gun.  However, this is debatable.  TCW's "Hostage Crisis" and some other episodes show that the assumption of it being a scope is not necessarily valid. 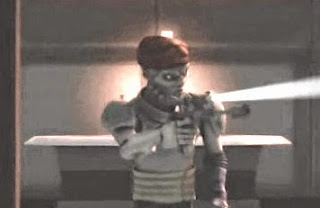 That is a very Han-like blaster with a light shining out of the upper tube.  And while I can imagine a high-tech flat transparent LED that would allow for an optical scope yet also serve as a weaponlight, we would, I think, need to actually see someone use it as a scope before claiming it to be one.  Even the EU did not think it a mere optical scope, as seen in the Star Wars Blueprints image showing an excess of wires, coils, and other bits inside.

Wouldn't the scenes where characters like Picard and Riker are training in a Phaser Range be useful for determining the ranges they train to hit a target at with a type-2? Those little colored balls don't look very large.

I'm not sure if this is evidence for a standard targeting system in Ensigns of Command or not?

(Data suddenly sits up)  ARD'RIAN: I was afraid your neural pathways were scrambled beyond repair.

DATA: I am equipped with diagnostic circuits and am able to correct many malfunctions.

ARD'RIAN: I'm not surprised at Gosheven's behaviour. But Kentor and the others, they said they were with us. I guess words don't mean very much.

DATA: Perhaps that is a part of our difficulty. Words are all we have been using. Humans seem to take much stronger notice of actions. I require a phaser.

DATA: A type of weapon. Unfortunately it does not function in the presence of hyperonic radiation. I will have to be innovative.

(Data removes a small circuit board from his right forearm)  DATA: Hyperonic radiation randomises phaser beams. But I believe I can improvise a servocircuit which will compensate by continuously recollimating the output.

ARD'RIAN: You're using your own neural subprocessors to build a smarter phaser.

ARD'RIAN: He'll try to stop you.

DATA: I sincerely hope so.