The original weapons loadout aboard the NX Class ship featured spatial torpedoes, but the destructive technology and yield was never specified.  We can make some guesses, however, and clear up a few myths that seem to have cropped up.

The weapons are often assumed to be nuclear devices of some kind, based on Spock's historical note in "Balance of Terror"[TOS1] regarding the Romulan War:

"As you may recall from your histories, this conflict was fought, by our standards today, with primitive atomic weapons and in primitive space vessels which allowed no quarter, no captives, nor was there even ship-to-ship visual communication.  Therefore, no human, Romulan, or ally has ever seen the other. Earth believes the Romulans to be warlike, cruel, treacherous, and only the Romulans know what they think of Earth.  The treaty, set by subspace radio, established this Neutral Zone, entry into which by either side would constitute an act of war.  The treaty has been unbroken since that time."

The important elements for our purposes are that "this conflict was fought [...] with primitive atomic weapons and in primitive space vessels which allowed no quarter [...] nor [...] ship-to-ship visual communication."

For starters, as a matter of 20th Century nuclear nomenclature, atomic bombs are generally considered fission devices, as opposed to hydrogen or thermonuclear weapons which were of the fusion type.  There are other alternatives like boosted fission devices and such where the label "atomic" could still be used, and of course some might argue that "atomic" could serve as a generic synonym for "nuclear", but I wouldn't expect Spock to be so imprecise as to employ the latter.  That said, the Romulan ship fought by the Enterprise 1701 carried "old style" nuclear warheads, for self-destruct purposes.  The detonation of one 100 meters from the Enterprise produced radiation burns against several crewmen near the outer parts of the ship.  However, this proves little, since although radioactive fallout is most associated with fission and fission-fusion weapons, even a pure fusion device could output sufficient quick-decaying neutron and other radiation to cause injury.

People have tried to reconcile Spock's description with what we see in Star Trek: Enterprise, and I acknowledge that it isn't easy.  For the Enterprise show, ship-to-ship visual communication even in first contact situations with alien species was commonplace, and the Enterprise herself, while undoubtedly less capable than a Constitution Class starship, hardly seems to justify the label "primitive", even "by our standards today".  Moreover, per "Silent Enemy"[ENT1], she had sensors capable of reading the DNA of opposing crews within their (unshielded) ships, and this worked while being fired upon.  That no Earth ship or Andorian or Tellarite vessel would've ever scanned a Romulan ship or debris of one during the Romulan War and found "Vulcan DNA" seems unlikely, at best, though not impossible given various Romulan tech related to defeating sensors, and the obvious chance of simple misidentification.

However, I view the NX Class as something akin to the Space Shuttle compared to the capsule-based human-rated space vehicles that came before and which have come after.   The space shuttle was a fantastic vehicle and ahead of its time, but built in support of (and to inspire) a level of spaceflight that didn't materialize in the vessel's lifetime.  Thus, we've 'dropped' back to capsules.   Similarly, the NX Class was probably the pride of the service during the Romulan War, and what few photonic torpedoes that could be produced probably did a great job, but the real workhorse were other types of ship, such as the Daedalus Class that appears based on far easier, simpler manufacture. 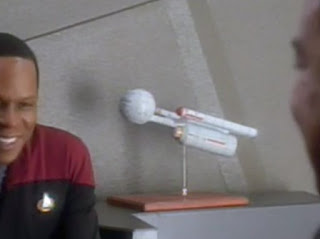 All that said, Spock's quote doesn't quite specify atomic torpedoes.   It proves atomic weapons were used, but not in what theater or what way.   That they're mentioned before the "primitive space vessels" could be taken to suggest that Spock wasn't specifying the armament of the vessels with respect to space combat at all.   Imagine a nuclear WW3 on Earth but with bombers and land-based ICBMs deleted, with submarine-launched short-range nuclear missiles as the only weapon, and now throw that concept into space.   That should give you the approximate flavor of what I'm suggesting, here.  In such a scenario, space-sub versus space-sub battles might still use comparatively mundane torpedoes, just as our nuclear-armed subs use 'boring' torpedoes today.

This is, then, similar in concept to certain notions of war after WW2.  Some thought conventional armies with conventional weaponry had been made obsolete thanks to the bomb, but this turned out to not be entirely true.

To be sure, neither side seeing the other largely precludes army-based or unit-on-unit surface action using small arms, and precludes the normal sort of warfare involving capture of enemy territory.   It does not preclude orbital bombardment of Earth and allied planets, however, and may not preclude the orbital bombardment of Romulan planetary targets . . . indeed, one could even posit intercontinental or similar-range weapons fired back and forth by troops on opposite sides of a planet provided that neither side had adequate space superiority to manage a deep-scan look-see at the opposite side.

Drones and remotes for land warfare are also quite plausible, though give the comparative lack of it in the Dominion War it would necessitate careful construction of the argument, e.g. jamming.

The Romulan War could thus have been a horrible total-war sort of conflict featuring whole colonies and perhaps the homeworlds of species, some we know or some we never heard of, spammed with atomic weapons launched from space or even worlds.  Certainly the Romulans were throwing nuclear warheads, presumably atomic weapons, around, and if used against inhabited worlds these could serve to deny planets to the enemy by preventing recolonization.   It is possible that the Earth alliance did the same, or else fought the war defensively almost in its entirety.   (Some have argued the Battle of Cheron is properly spelled the Battle of Charon, which shares the name of Pluto's moon, and in that context is associated with the war.  This could represent a final destruction of the Romulan fleet just as it was to attack Earth.)

Indeed, it is tempting to ponder at least minimal atomic hits on Tellar, Andor, and perhaps even Vulcan as a way to explain the relative absence of these species from the Federation and Starfleet in TOS and even TNG eras.  Earth, backwards but untouched, could Marshall Plan their way into Federation prominence, with Tellar and Andor leaning on Earth for support in the aftermath.  This works with or without Vulcan getting hit, which is dependent on whether the war was in part a Romulan blood feud with their Vulcan cousins or if they left Vulcan alone because of the relationship.  While Vulcan, advanced but increasingly insular, might not have been especially prominent thanks to their shift in philosophy, I tend to favor the idea of Vulcan taking some hits, as well, and of course I imagine all the worlds might've had impacts to at least outlying colonies.  This would also factor in to Earth's proverbial heroic narrative, since Earth was the most recent prior victim of an atomic horror and could help other worlds recover quickly.

No, technically it is not necessary for the homeworlds to be hit, at least not seriously, but it does make the war much more interesting and helps explain Earth's dominance.   Then again, it's called the "Earth-Romulan War", which seems unfair if like every world *but* Earth was hit.   It could simply be that Earth was at a great distance and her shipyards were never hit, compared to the allies.

Beyond that, all we know is that at some point someone saw a Romulan ship's belly, and of course we know the Romulans of a century later tended to self-destruct rather than be captured, but beyond this we have little.

Given this, we can still imagine fission or fusion torpedoes in use, and thus spatial torpedoes being of nuclear technology.  On the other hand, they could be something else, like some exotic explosive as might be found on the list from the TNG episode "Night Terrors".  In that list are notations about "conventional sarium krellide explosives" and ultritium, among other options.

(We could even add nuclear isomer explosives to the list, if they aren't represented already.  These are theoretical, but involve nuclear isomers which would, in principle, be a couple of orders of magnitude less energetic than nuclear weaponry but far more energetic than simple chemical explosives.  I imagine discoveries of this and similar types are already on that list.)

At about a half meter, or around a foot and a half, wide, the spatial torpedo is on par with a number of small nuclear munitions of the 20th Century:

- The M388 'atomic watermelon' used in the "Davy Crockett" battlefield system, which used a 0.276m  W54 warhead likely to have had a quarter of a kiloton potential yield, the smallest ever produced

However, we've seen the warhead of a spatial torpedo, and it is far smaller than the torpedo's diameter, and looks and is of an apparent weight nothing like what we would expect of a 20th Century fission warhead. 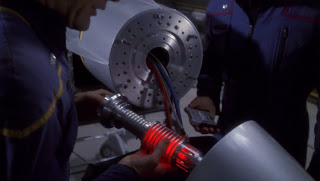 Instead, it resembles the red glowing sarium krellide power cells of phasers and (presumably) phase pistols.   Even assuming it is a sarium krellide based device, it could still represent merely the first fusion-inducing stage of a pure fusion device, depending on sarium krellide's potential yield and what else is in that nosecone area.

Then again, there is reason to think Earth wouldn't have used atomic weaponry under normal circumstances.  Much as the Eugenics Wars led to a ban on genetic engineering, Earth's WW3 experience may have led to avoidance of nuclear weaponry.

It's not clear if this represented giving up yield, though.  Spatial torpedoes were never seen to be that much more destructive (if at all) than the quarter kiloton Romulan minefield device . . . but then, when striking ship hulls, even with "full disruptors" and with torpedoes set similarly, photon torpedoes hardly represented much differently, either (e.g. Star Trek: Generations).   Since we never saw spatial torpedoes hitting a clearly quantifiable target, then, it's impossible to say with any certainty what the yields were.

The Romulan War was a vicious campaign of atomic weapon deliveries via Romulan spacecraft and/or warp missile delivery systems against the worlds of Earth and her allies.  Eventually the allies were able to defeat Romulan fleets and weapons, but at great cost and without the ability to finally invade the Romulan star system.

For Earth, pre-war style NX Class starships and their photonic torpedoes, both being difficult to build and scarce in number, were supplanted in mainline use by Daedalus Class ships and assorted wartime munitions, including the traditional spatial torpedo, which used conventional sarium krellide explosives to allow for notable but not extremely high yields.  These ships, combined with remaining pre-war Vulcan ships and the fleets of Andor, Tellar, and other allies, were nevertheless a great success.

Earth, having long enjoyed diplomatic successes thanks to its Starfleet, was also able to come out of the conflict relatively unscathed.   She had become a proverbial 'arsenal of democracy', her ships serving all the allied worlds and with wartime construction support from all, and so it was that Earth became the seat of government for the new United Federation of Planets.