Something I Never Noticed During ST2 ...

The TMP-era ships have phaser emitters that are rectangles with two little hemispheres on top. Generally I've rolled with the common idea that the two hemispheres were little ball turrets or some high-tech no-moving-parts emitter thingy or what-have-you. But whatever it was, there were just two per rectangle.

But if that were so, then what the hell is this?: 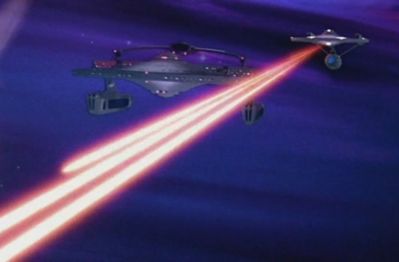 That's three beams with a fourth on the way, though there's enough wiggle room for the fourth to be non-overlapping with one of the other three (and hence still keeping the three total).

But that's three. Three, I say.

I'd always thought they fired in rapid alternating sequence, so three or four beams wouldn't be overly surprising...

Well, now there's an excuse to analyze that battle as much as I've analyzed the battle in Nemesis... I'll send you the 500+ screencaps I'll probably end up with when I'm done, if you want.

They do fire in bursts, looks like the shorter one on the far left was fired...well last.

Unfortunately, I don't own the movie (on DVD) so I won't be doing the frame by frame deal.

I have the Director's Cut version on DVD, and I've got a week between school terms next week, so I'll be able to get some pretty good screenshots.

In the peceding scene( I do have the Directors cut DVD) Sulu stated that phaser lock was inoperative, Kirk ordered to make a best guess and fire when ready. There was some sort of distubance which threw off Sulu's aim so he did have to fire twice in rapid sucession to score a hit on the Reliant.

I didn't think he hit, but it's not consequential.

In any case, nothing mentioned here allows for two guns to fire three simultaneous bullets, unless of course we're not limited to the two guns we thought we were.

So, I took 106 screencaps (which I will upload later), and there are, indeed, 3 phaser beams being fired at that point. There is one other instance of three beams being apparently visible, shortly before this shot, early in the life of the beam(s), but the next frame shows just a single, solid beam instead of two divergent ones.

There are also a couple instances in the close-up shots of phaser fire at different points in the movie where individual 'turrets' appear to fire while still discharging a beam. This results in the appearance of a pulse along a continuous beam, as well as two divergent beams. Whether there is enough consistency to say that there are, indeed, multiple 'emitters' per turret or it's a VFX error akin to the Darmok torpedo tube phaser is hard to say, though... I'll post a link to my screencaps once I get them uploaded, and you guys can take a look and chime in.

Ok, uploaded in a .rar pack.

Should also note that I will be presenting a more detailed analysis, now that my term finals are over and I don't have any classes for the next week.

I'm still torn as to whether it's a one-off inconsistency et al "Darmok", or if there's enough there to say that each turret has multiple emitter points. It would sort of make sense, though, especially given the Miranda's rollbar phasers. Later cannons could then be made more powerful per shot without changing the emitter type by simply linking the emitters together like an array clustered into a turret, once the emitter linking technology had been developed (I don't believe it had been by that point, or not beyond experimental stages, given the lack of phaser arrays for several the next few decades, though I think early deployments of the technology can be seen in the Constellation's big underbelly cannons and the big cannons on the underside of the Centaur-type's saucer)

I thought I remembered seeing quad beams in "The Paradise Syndrome."