Perusing a page on my site, I saw where I'd said I wasn't sure what the terminal velocity of a Federation shuttlecraft might be.

Well, *that* needs fixing, so we're fixing to fix that right now.

Applying Google-fu, I found:  http://www.wikihow.com/Calculate-Terminal-Velocity .  There, we are told that terminal velocity is the square root of the following:  2 times the mass and times gravitational acceleration, divided by the density (of air) times the area of the object times the drag coefficient.

First, we have a mass of the Type-6 shuttle that is an estimate from my Volumetrics pages, scaled down from the density of full-size ships.  That said, the Delta Flyer is believed to be of similar density to Voyager, and so we're gonna roll with a similar density, providing a mass of 29 tonnes . . . that's only about half the mass of an M1A1 Abrams tank, so I'm cool with it.

Second, the reason I didn't think I'd be able to calculate it before is because I had no method of determining the drag coefficient.   However, I am now willing to make scientific-sounding wild-ass guesses.   For instance, a handy-dandy list of various drag coefficients is linked to from the WikiHow page.  For example, a cube is said to have a drag coefficient of 0.8, a flat square plate facing the wind provides 1.17.   For our purposes, we'll want to look at something akin to a minivan or SUV and then bump it up a notch to factor in the nacelles.   Doing so, we find that an SUV commonly falls somewhere in the neighborhood of 0.45 or less, while a bus is listed as 0.6 to 0.8.  So, I'm going to say a shuttlecraft should be in the 0.55 range, but your coefficients may vary.

A final problem is finding the frontal area of the shuttlecraft . . . as in, were it to fly through paper and cut it perfectly rather than tear it, thus making a neat shuttle-sized hole, what would the area of that hole be?  Fortunately, this is easy enough with Google Trimble SketchUp, at which point we find a frontal area of 7.55 square meters, give or take. 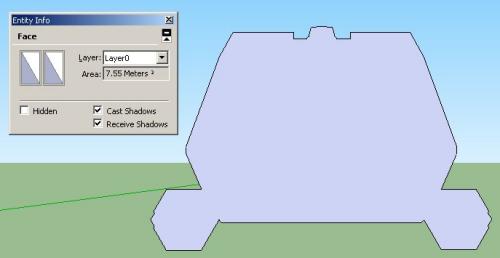 Interestingly enough, that's greater than Mach 1 at the altitude indicated by our "average" pressure.   If we calculate instead based on sea level pressure of 1.2 kg/m^3, then the terminal velocity drops to 338 m/s, which is so close to Mach 1 at sea level STP (340 m/s) that, given the back-of-the-envelope wild-ass nature of our exploration, it might as well be close enough.   (And hey, wouldn't it be cool to see the transsonic condensation clouds around a shuttle as it is about to hit the ground?)

So, terminal velocity of a shuttlecraft is approximately 340 m/s (Mach 1) at sea level, and greater than Mach 1 at higher altitudes.

Now, of course, it's worth noting that this is not especially useful for the page in question, since the shuttle from "Rise"[VOY3] was not actually dropping like a brick, but was instead engaged in powered descending flight and then suddenly lost power.  The result would be more like a ballistic trajectory than a simple fall.   But hey, it was fun anyway, wasn't it?

I just came in from shoveling a Hoth-level volume of snow at Rura Pethe temperatures, so I didn't check all your math, but I do have one question.

You list the terminal velocity as 390m/s^2, but that would actually be an acceleration. (Thanks to the ^2, or 'speed per second per second', as I'm sure you know.) So, is that just supposed to be 390m/s, and you missed a step that would remove the square, or is something else wrong?

P.S. I've been following you site for YEARS, and it is fantastic, keep up the good work.

Just a muscle-memory typo, pay it no mind. I will fix it ASAP, and thanks for the proofread!

All fixed now. Sorry for the confusion. As you might've noticed, I even gave the datapoint of Mach 1 at sea level with a senseless squaring.

I'll blame it on the lateness of the hour.

Oh, and as far as the units, feel free to count off points for me not fully showing my work. Alas, I had no ready way, short of making lots of pics, to attractively present the calculation.

Excellent. I was hoping it was something simple. Glad to help.

On an unrelated note, in case you missed it, Mythbusters did an episode last Saturday that included a recreation of the Endor Moon AT-ST log smash. I was comparing there data to yours the whole episode, and your math held up very well, even better than theirs at times. (Their logs were only 10ft long for some reason.) If you haven't seen it, you should check it out.

Yes, I missed it, and I absolutely love you for sharing.

I haven't had a chance to watch the whole thing yet, but it looks like the logs are way strange, yes . . . short, flat-fronted, and stout. But the results against the armored truck look pretty good.

I couldn't have asked for a better late Christmas present. ;-)

Very energetic post, I enjoyed that a lot. Will there be
a part 2?