So once, a long time ago, the computerized playlist system of a classic rock station pooped out in the middle of the night.   The young DJ was stuck all alone (save for a friend who was there hanging out) and didn't know who to call or how to fix it, but he knew how to play songs from CDs on the air.  Unfortunately, the collection from his car was not exactly as classic as the normal playlist, so the classic rock station ended up playing what the DJ thought were "classic" songs that were just a few years old, at least until the station owner called to find out why the hell his classic rock station was playing Nirvana and similar.

That was not the pinnacle moment in the history of radio, to be sure, but the point is that one can certainly imagine an event where the reverse happened . . . "You're listening to 109.9 The Frog, playing all of today's greatest hits!  Next up, Buddy Holly's recently-released That'll Be The Day!"  If you heard that, you might think you'd entered some sort of freakish time warp.

That was the situation I found myself in within the past few days.   I went to check up on the Kyber Crystal debate stuff and found that, alas, the current most active inflationist has changed subject . . . no, not to Babylon 5 or some other show I haven't watched, but instead to -- of all things -- the Ewok Arrow.  He has thus kindly provided us with more teachable moments insofar as how not to do this sort of thing.

And then while composing the response herein, I ended up going to look at the SDN forum and found that they were actually claiming that the asteroid that sheared off the bridge tower in TESB had only damaged a communications antenna, and that the reason the ship captain recoiled in horror was merely an instinctive reaction to something big coming his way, like a driver flinching if a water balloon is thrown against the windshield.

I was sorely tempted to stop and go to an internet timeserver to make sure I didn't have a wi-fi connection to 2004.   Seriously!   After all, I'd recently made a series of posts at StarfleetJedi.Net about "Zombie Inflationism" . . . I was referring to inflationists not realizing their religion was extinct, but I had no idea even then that I'd find myself literally seeing modern antiques like "the bridge tower's undamaged!" or "the Ewok arrow didn't hit the backpack!"

The TESB bridge tower obliteration was a question that I'd put to bed on this site in April 2003.  (Here's a Wayback version with the pics intact from 2004.)  I've updated the screencaps since then but didn't need to change the text significantly, because (prepare yourself for a mind-blowing fact) . . . obvious-conclusion remained obvious.

The bridge tower and soon the whole ship were destroyed.  End of debate.

And yet, here it is 11.5 years later and we've got the myth of "That?  'Tis but a scratch!" still being repeated at the inflationist madrasa.

And then, lest we forget, we have the arrow thing.

For those of you unaware, the Ewok Arrow was one of the major battles of the olden days. 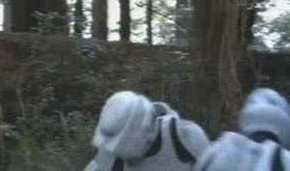 Here is one of the pages on the topic as it existed over 10 years ago, before access to Star Wars on DVD or much less Blu-ray.   (Note the reference to the long page load time on 56k!)   To summarize, the old inflationists were claiming that an Ewok arrow sticking out of a scout trooper just had to have hit above the guy's backpack on the black bodysuit, despite the clear evidence that this just wasn't so.   The Ewok arrow had clearly penetrated the backpack, as could be determined even with the VHS-video-capture-grade evidence available at the time.

However, there was one frame where the arrow seemed to line up with a smudge on the top of the trooper's backpack, and it was this singular frame that they planted their standard on, despite the fact that this coincidence didn't occur in any other frame where both smudge and arrow were visible.

With the advent of the DVDs, their argument became even less sustainable, and many just sort of dropped the old argument.  At some point I updated with the new DVD images, and though some still tried to claim the arrow wasn't in the backpack, the inflationists seemed generally to stop pressing the issue.

Nevertheless, in 2007 I posted HD caps of the arrow scene to StarfleetJedi.Net which made it even more obvious-er that the arrow was in the backpack. 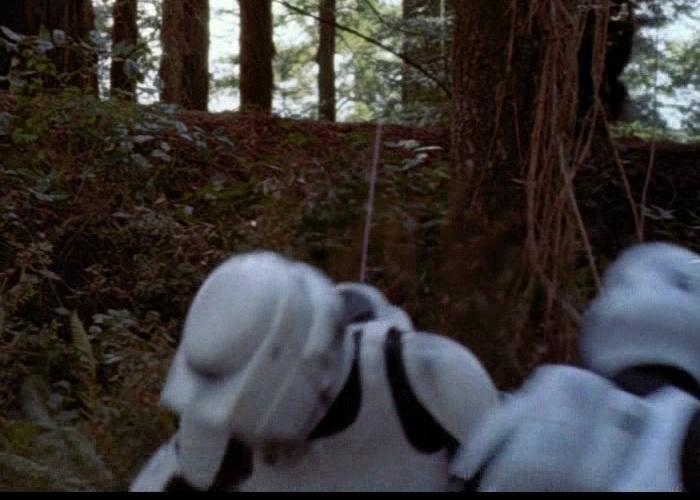 I don't recall ever hearing any further argument on the topic, so I presumed that the inflationists had wisely (and, of course, quietly) backed away from the claim.

I was thinking of commenting "you know, for a video guy and self-professed 'evidence man', I find your lack of video disturbing",  But, he references a previous video about the arrow (stormtroopers.mov at SciFights.Net, about 40 minutes in), but even in that video, he basically just glosses over the problem.  As is so often the case, he simply plays the scene, repeats some old wacky claim (or, sometimes, a new, possibly wackier one), and provides no factual analysis or observation.  I can do that better without saying a word:

In the case of the latest video . . . at least unless he edits it, which also happens sometimes . . . he simply shows the frame of the video in which the arrow is lined up nicely with the smudge (is it really 2004 again?), and then goes on to use a gappy fan costume to "prove" that there was a lot of room above the backpack for the arrow to possibly hit, as if somehow the mere presence of a large area not covered by metal or plastoid is relevant. 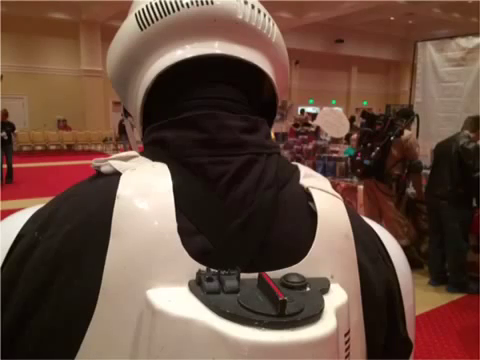 It isn't.  Even if we accept the fan costume as screen-accurate (though really, why not show a real onscreen one like I did years ago?), the whole nature of the argument is silly.  It doesn't matter if the backpack is way down on the guy's butt like he's some sort of saggy-packed thugtrooper who holds his blaster sideways ... what matters is where the arrow actually hit.  Did it hit the backpack or did it hit above the backpack?  That's the question, not the amount of not-metal-or-plastoid available.  It isn't like the bodysuit would suck the arrow towards itself with greater force with the more of it that showed.

And y'know, it isn't like I haven't spent time pondering this stuff.  Indeed, let's stop and consider the aforementioned issue of screen accuracy, shall we?  Here are the backs of two different scout trooper models uploaded by "abdyla" to the SketchUp 3-D Warehouse: 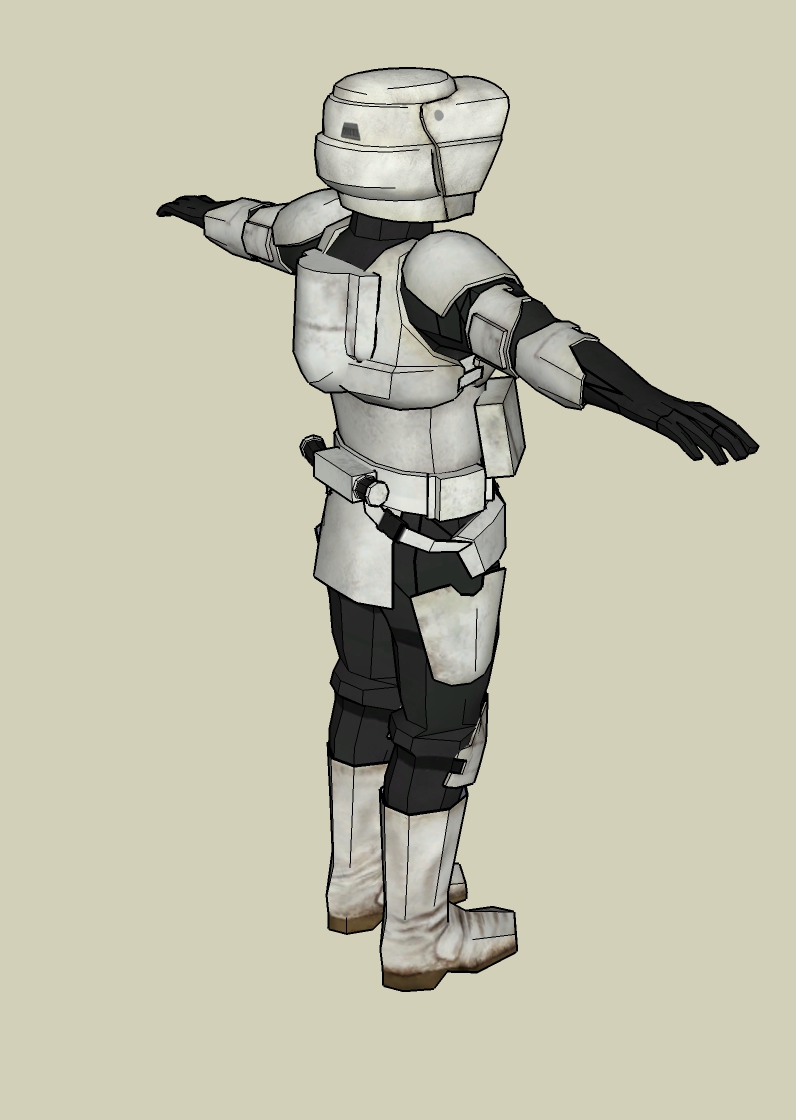 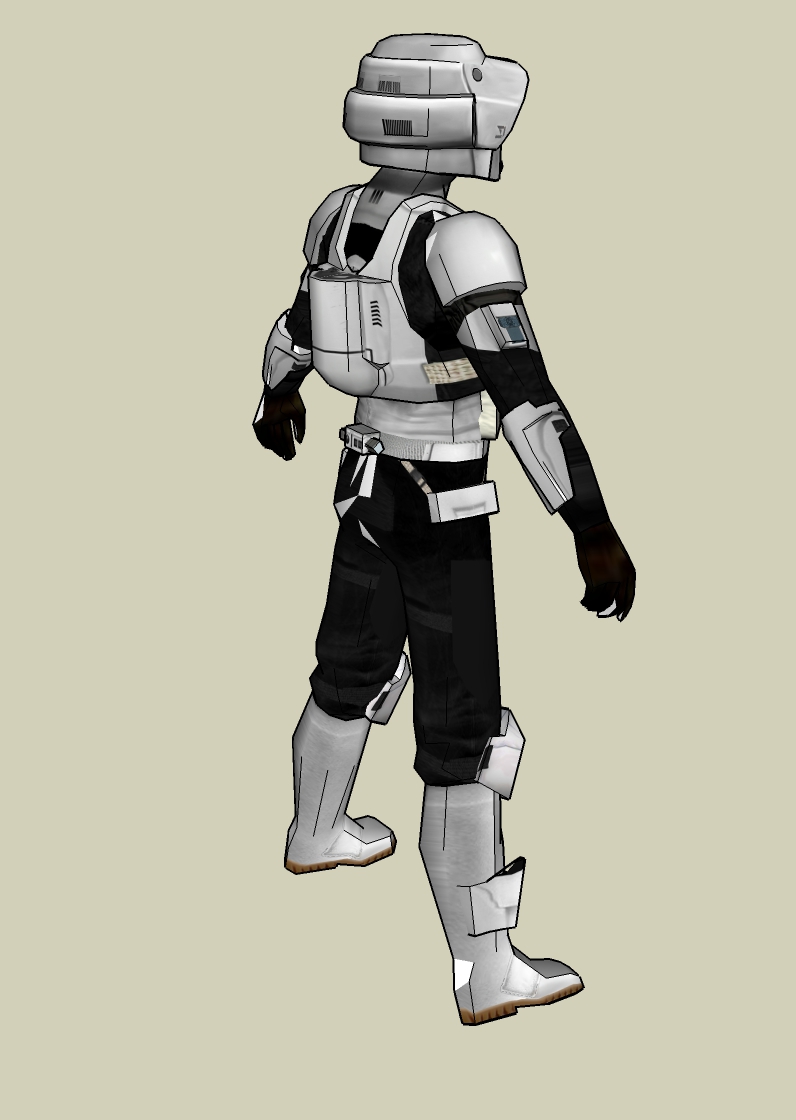 Those are 3-D models, guys.  It ain't tough to move a digital line ... certainly it is easier than redesigning a plastic suit. And yet even in CG those two wildly different models disagree completely on how high the pack sits up the back.  But to Brian, some random dude from a convention is the highest authority.  Okeedokee.

So where did it hit? Well, it is brutally, patently obvious that the arrow struck the backpack itself.  We've known that for well over a decade.  I argued it successfully based on VHS evidence, then with DVD it was made more plain, and HD only confirmed it that much more.

But Brian doesn't acknowledge the existence of other arguments (unless in strawman form).

Now, in my opinion, only flagrant, willful ignorance or flagrant, willful dishonesty can possibly be involved, here.  The asteroid scene discussion on SDN can be included here, though I give wiggle room for off-the-cuff forum posts.  But regarding the arrow topic, if you're gonna pretend to be an expert (as Young does), do your job and throw a little research in.   If you claim to have researched it (as Young does), then do your job right and don't lie about it to your viewers, or yourself, as part of your endless, desperate campaign to inflate Star Wars technology over that of other universes.
Posted by Guardian at 10:18:00 PM

The arrow is in the pack. If you invert the colors of the screen cap you will easily see where the arrow is sticking out of.

I can't be the only person to know this trick. It's great for seeing otherwise hard to see details.

I had color inversions on the pages years ago and did it in the video, too. So no, it isn't just you. :-)

I looked at the photos even with color inversion and I see a long smudge in front of the backpack. I am sure you will call me blind but it looks like the arrow hit the unarmored area. What else accounts for teh smudge?

I haven't looked at the arguments in enough detail to say with absolute certainty whether the arrow pierced the backpack or not. However there was another arrow which bounced of another troopers shoulder pad. If that trooper had not been wearing any armour, like a Federation officer, then the would have been injured by the arrow.

"Anon: I looked at the photos even with color inversion and I see a long smudge in front of the backpack. I am sure you will call me blind but it looks like the arrow hit the unarmored area. What else accounts for teh smudge?"

No, you aren't blind, and it is easy to make the mistake you did. The black part of the backpack is not flat, and as a result you are seeing isn't the arrow. The lines just don't match up properly.

"Firmus Piett: However there was another arrow which bounced of another troopers shoulder pad. If that trooper had not been wearing any armour, like a Federation officer, then the would have been injured by the arrow."

This has nothing to do with Star Trek. Why bring Star Trek up?

Where the hell did my old response to Anon go? Dammit.