Let's face it: a ship side view marked in hundreds of meters is somewhat academic.  To fix this, it helps to have a model, real or 3-D CG, and other models to scale.  To that end, I have picked some worldwide-common larger objects to compare vehicles and vessels against.

This is not an entirely original idea, of course.  One of the Okuda/Sternbach reference works relates a story wherein they drew the Enterprise-D over the Paramount backlot and it blew everyone's mind.  I had a similar experience fifteen years ago when seeing a "Tallguy" video wherein he inserted a cutout of himself all over the Enterprise from the Original Series to give a sense of scale.

The Stage 9 project was also very good for this, as you'd get to virtually walk around the Enterprise-D main shuttlebay, which is way bigger than you realize (yes, you, and me, too, even after seeing it).  More recently, I've taken some SketchUp models in my collection and loaded them into Google Earth renditions of my area, just to have my mind blown all over again despite the fact that I am, I think, pretty keen on this whole Starship Volumetrics and scaling thing.   Additionally, I've played around with this sort of idea in other ways over recent years . . . I have a huge SketchUp file with tons of smaller vessels in it . . .

I started with Star Trek shuttles like the Type-6 and Star Wars fighters like the X-Wing and TIE Fighter, then finally had to stop myself at the 110 meter range (the Klingon Bird of Prey) because it was just getting crazy.   Scattered throughout and even atop the vessels are Ford Crown Victorias, the quintessential American police car of the late 20th and early 21st Centuries.  (A BoP just isn't complete without a Crown Vic as a hood ornament, donchaknow.)

That's part of the beauty of having things to scale . . . you can hold them together and see the true size.   Even better, doing it with computer models allows you to really mash things up, overlapping things in ways you never could with physical models.  That's why I don't intend to simply keep things statically placed, but more on that later.

As for the Crown Vic, despite their presence in such far-flung locales as Moscow and the Middle East (not to mention, hilariously, the Autobahn), and their ubiquity in American movies, the Vic is not necessarily the best yardstick outside the United States.  Still, I think that the proper effect can still be replicated fairly well provided some pretty universal yardsticks are in-hand.  These yardsticks need to be things that are almost instantly recognizable and that most anyone around the world should be able to approach and touch and experience.  And, really, having more than two or three nose-to-tail is pretty useless, in my opinion . . . the imagination begins to falter.

Cars *in general* are universal, yes, but there's a big difference between various cars worldwide, just as seeing "Tallguy" only gives the roughest approximation of normal-size people.  And, despite certain recent cars being popular worldwide, such as the Toyota Corolla, I wanted to be sure the yardstick was not only common but also *recognizable*, which modern cars only barely are.  Even then, it only lasts until being totally changed in the next soulless iteration for the next faux-obselecence redesign.  Similarly, I almost included the circa-1990 Toyota Hilux, a vehicle known around the world.  When not appearing in Back to the Future or being beaten up by the Top Gear lads,  they're often seen as "s***ty technicals" with some gimpy weapons system bolted into the truck bed.  Alas, they've changed so much over the last couple of decades (not to mention the varieties available at the time I'm interested in) that it just didn't seem proper, despite the relatively handy size.

However, there are certain cars and other objects that transcend decades and borders.  So here's what I'm going with, in size order. 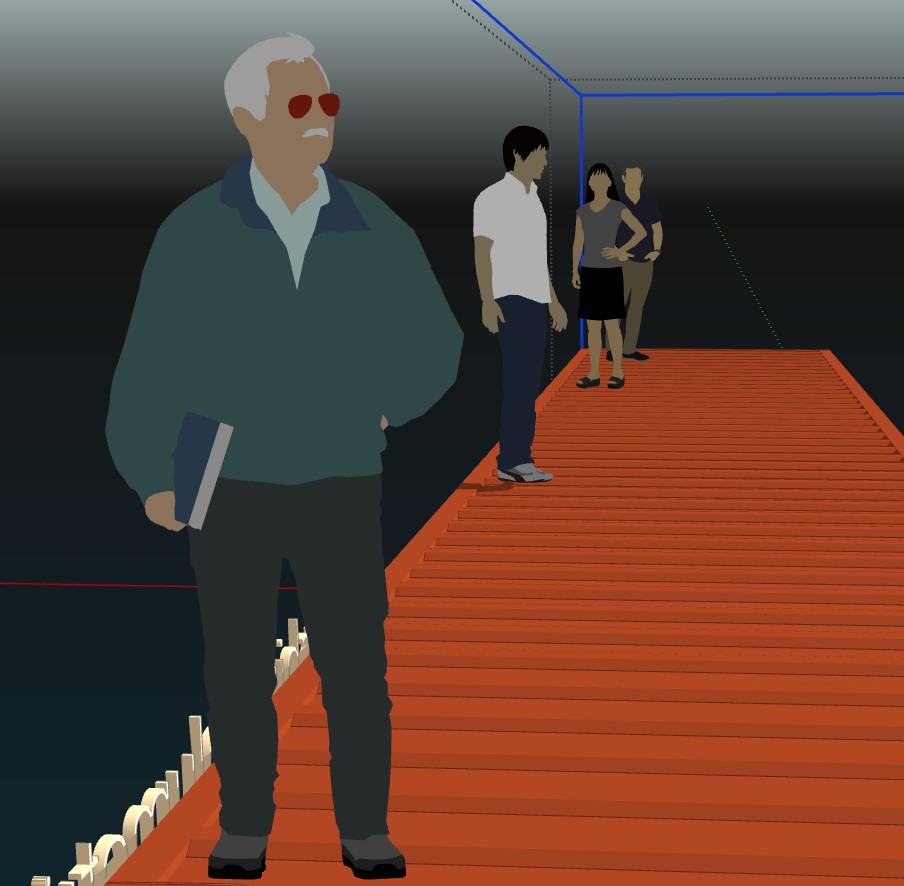 These come with SketchUp, and are included just because.

Clonetroopers would've been better, I suppose. 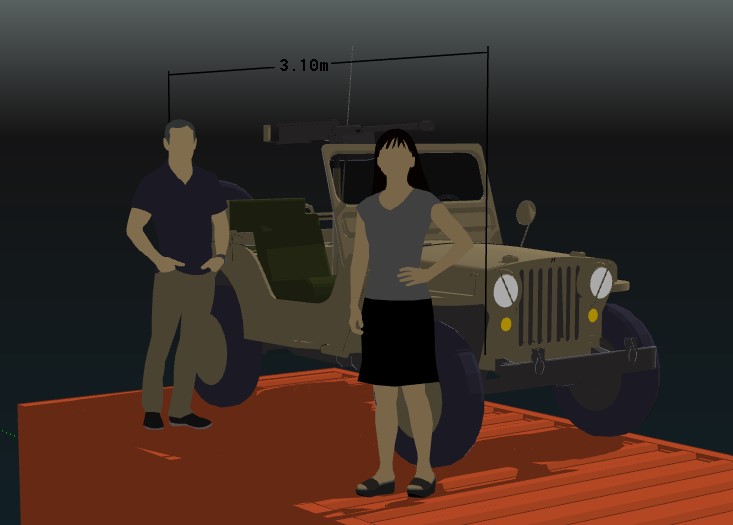 Modern Jeep Wranglers are somewhat fatter than the original (see in the gallery here and great pictures here), but, internationally, Jeeps of the small original dimensions (or nearly so) are still made and around, e.g. the Indian Mahindra Jeep clone.  It should thus be relatively easy to find a copy or compare to a slightly fatter modern variant . . . just make sure it isn't the four-door. 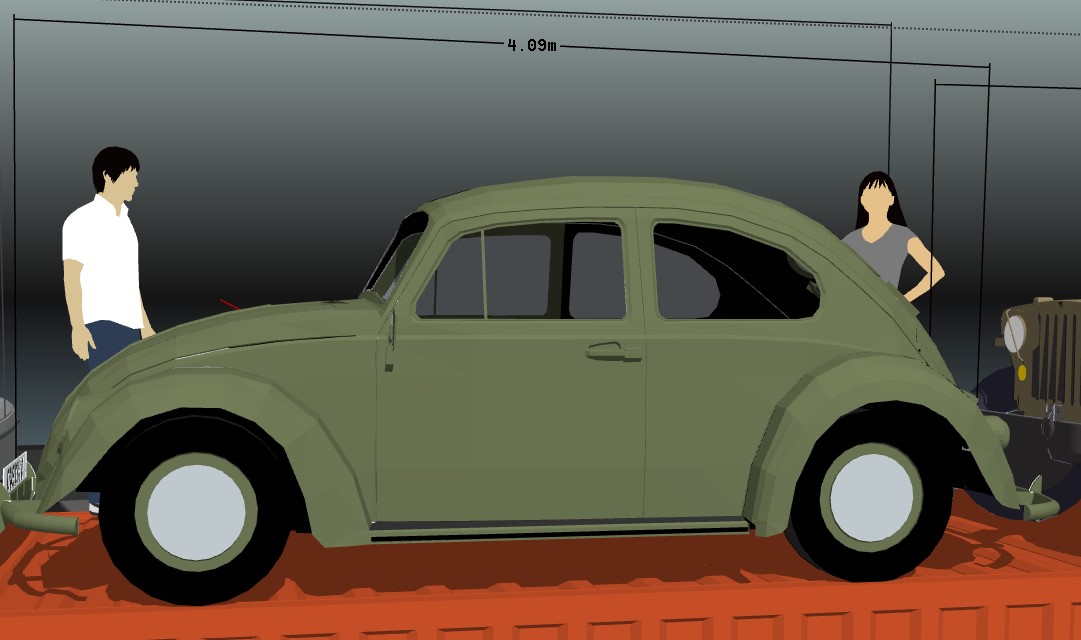 My model is of the 1940 KDF-Wagen, but mostly because it's the lowest-poly model available (thus easy on my PC's tired gerbil).  A symbol of fascist economics loved in the 1960s by their communist cousins in the US, styling varied slightly but sizes never changed all that much . . . even the 1970s alternate long-nose "Super Beetle" was only three inches longer.  This vehicle was made in numerous markets for eighty frickin' years, with Mexico production ending in 2019, and there are plenty around the world.  After recently questioning their ubiquity, I saw one in a random driveway just this past week. 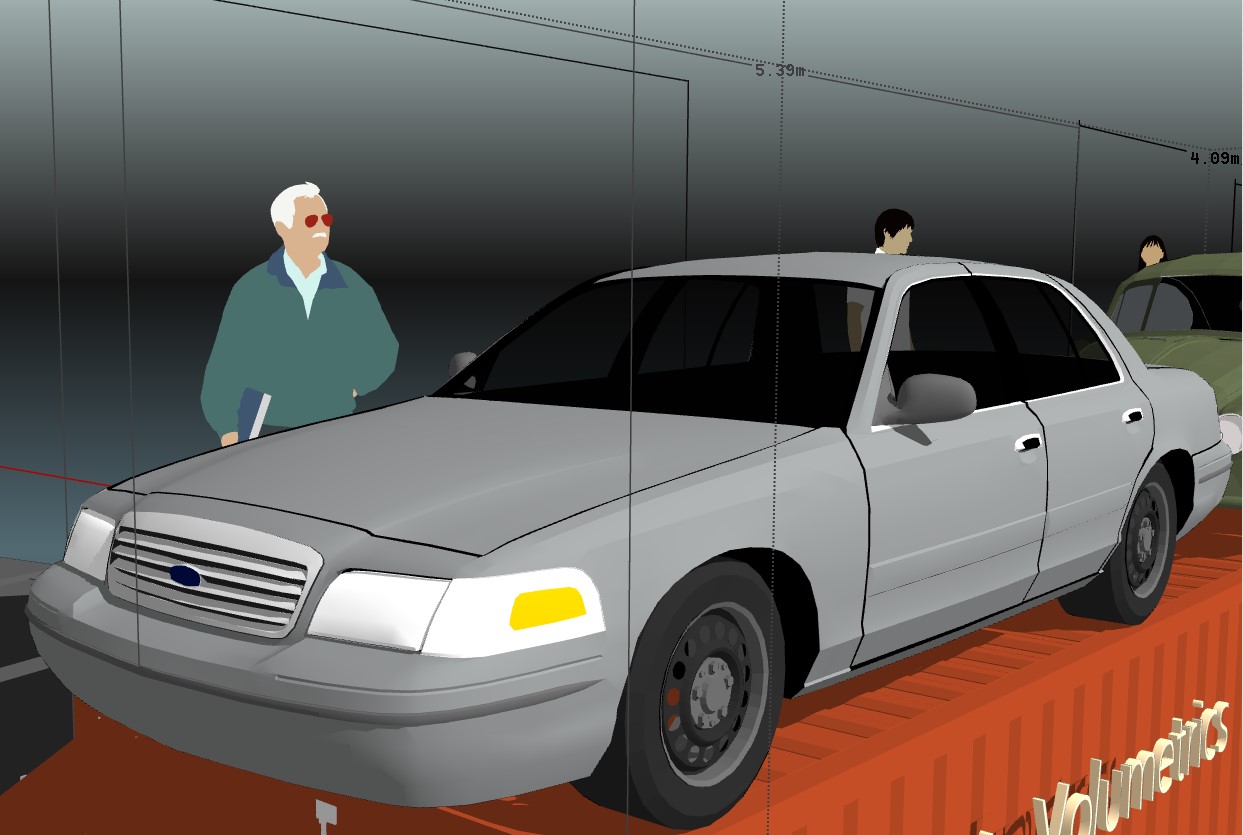 Not the most ubiquitous item worldwide, as noted above, but I like it.  While some US police jurisdictions have retired them outright or relegated them to secondary tasks, I have adequate odds of laying hands on a Vic in minutes by calling 9-1-1, swinging through the parking lot of an assisted-living facility or bingo hall, or checking the Wal-Mart parking lot for those stripped police cars people buy.

Also, while the styling is a tad different than the 1992-2002 model and way different than the boxy 1980s version, the length didn't change, which is rather handy.  Moreover, the Mercury version is basically identical, and Lincoln's Town Car is also very close in size. 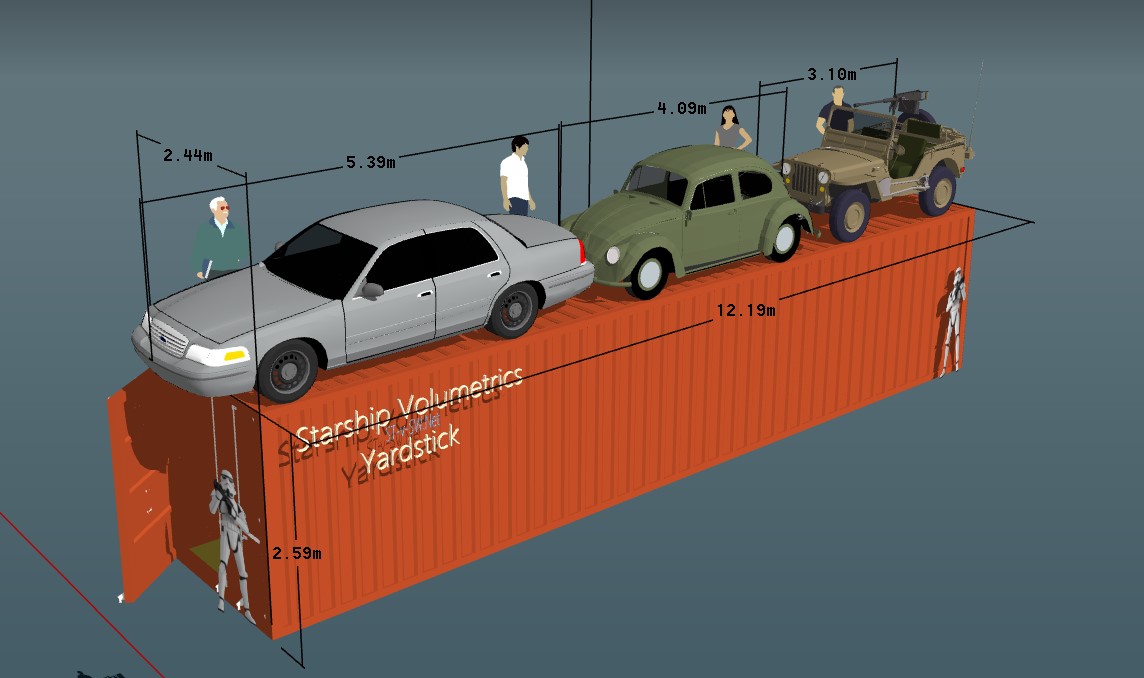 I appreciate, even as a Metric-American, that the entire planet is stuck with ships smothered in containers using American-design footage.  They're everywhere.   Epic troll.

The three cars fit atop it, with just a bit of Vic hanging off.  So it goes.

I almost included the "Eurotainer" tank that looks like a primitive version of Geordi's containment unit from "The Child"(TNG2), and I looked at the standard contoured air cargo container, but neither quite fit my needs.

After seeing Jonathan McDowell share a post of telescope mirror sizes compared to a tennis court, it finally occurred to me that a tennis court was probably a great idea.   After all, not only are these easier to fit and probably much more numerous than the baseball diamond you'll see next, they're probably somewhat easier to get to than the shipping containers, for many people.

A basketball court doesn't work out quite as well, as there are differing dimensions between the NBA and international versions -- almost a meter, enough to be annoying -- and amateur courts, even professionally built and installed, have wildly variable dimensions.   However, I've included a couple of marks to represent a 28.7m by 15.2m NBA court atop the below:

All around the world folks use the same rules, so one of these should be relatively easy to find for many folks.  After all, I'm told by Darth Vader himself that the one constant throughout the years has been baseball . . . and I'm quite certain Benjamin Sisko, as written by Michael Piller, would also approve.

Everything on the baseball diamond is scaled off of the point at the back of home plate.  As such, I  have placed the shipping container in line with this, as well as the nose of the next item: 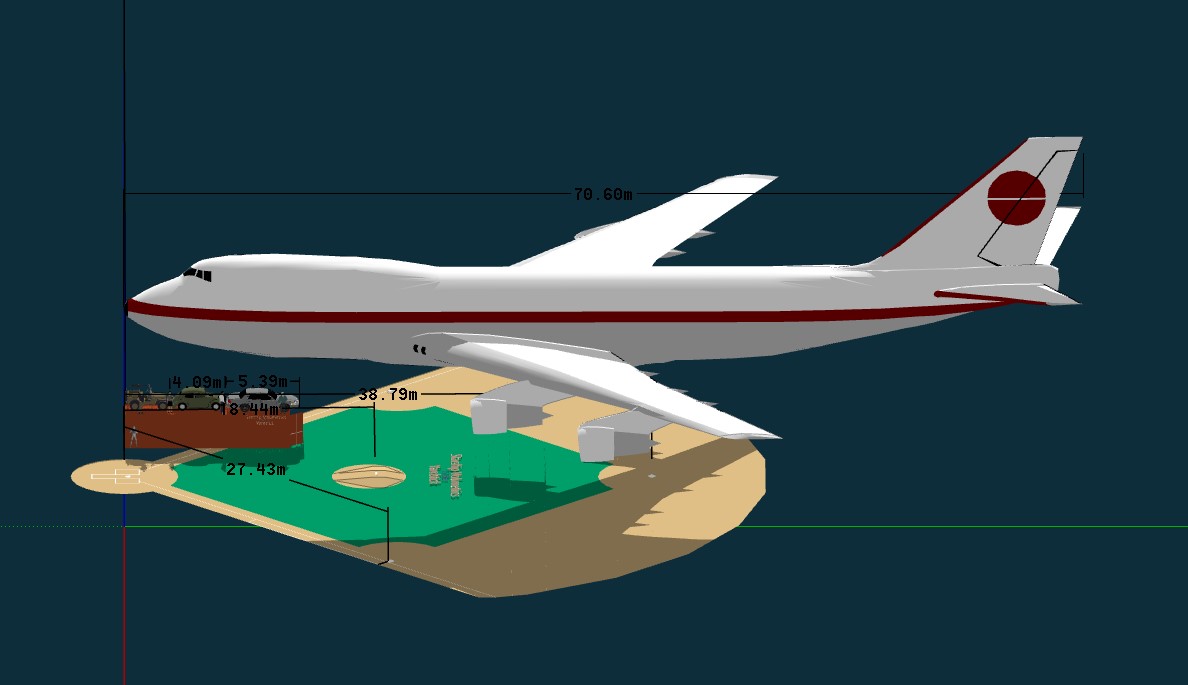 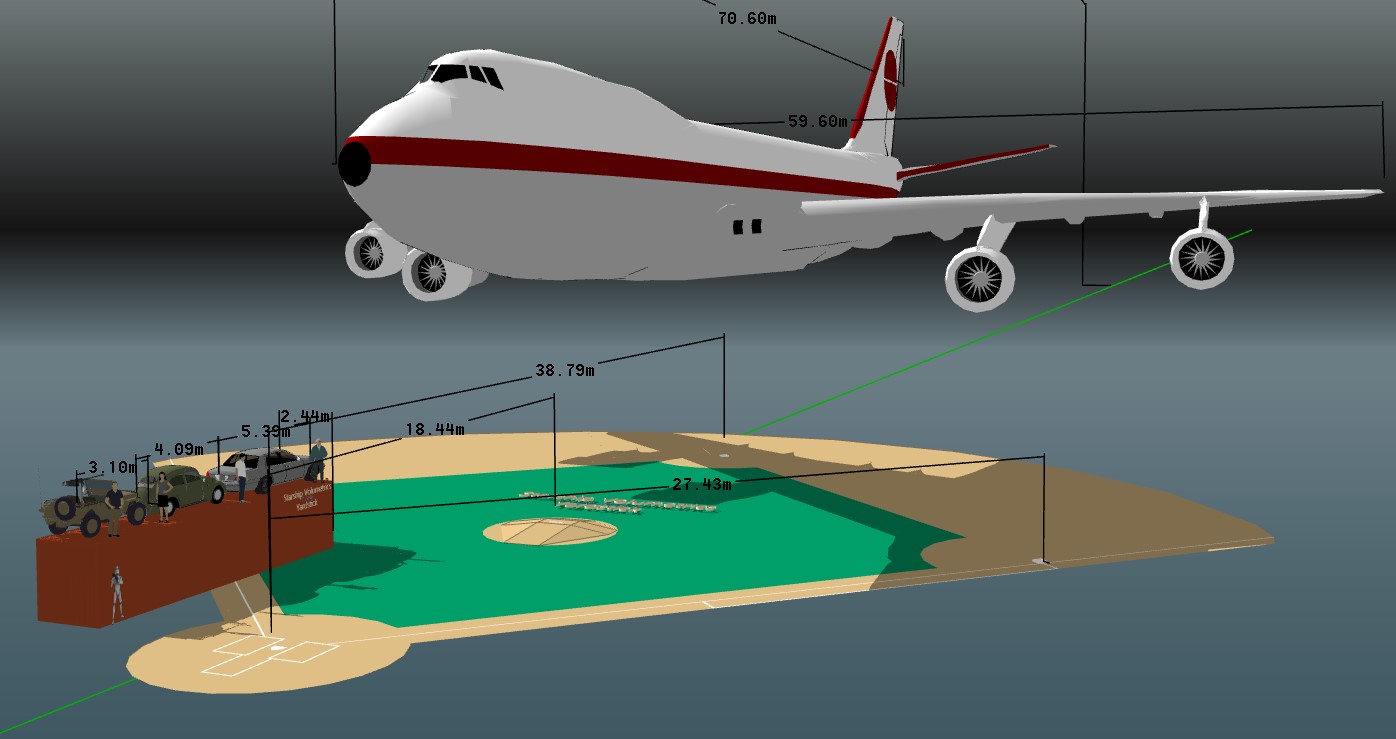 At 70ish meters and still in production for another few minutes, this is an easily-recognized air icon that will be around for awhile.   Unlike basically any other commercial aircraft that comes in various versions, the 747 was basically always the same length and, of course, is matched only by the A380 in recognizability.   Seriously,  there are more numerous commercial aircraft, but it's scarcely worth trying to distinguish them.

One delightful fact is that the 747 is almost exactly one half of the refit Enterprise saucer, a fact I'd never have known without scale models mashed together.   Another good reason to include the 747 is Air Force One.  After all, we tend to imagine the small 110m Klingon Bird-of-Prey, some 40 meters longer, as almost too tiny in Trek scales, and yet AF1 is a three-deck command ship with multiple rooms and areas.

Military planes seemed useless to include since they're not as accessible, though in the spirit of encouraging Brandon I'd like to point out that the C-17 Globemaster III almost made the list, given the readily accessible scaling videos against human beings in 2021. 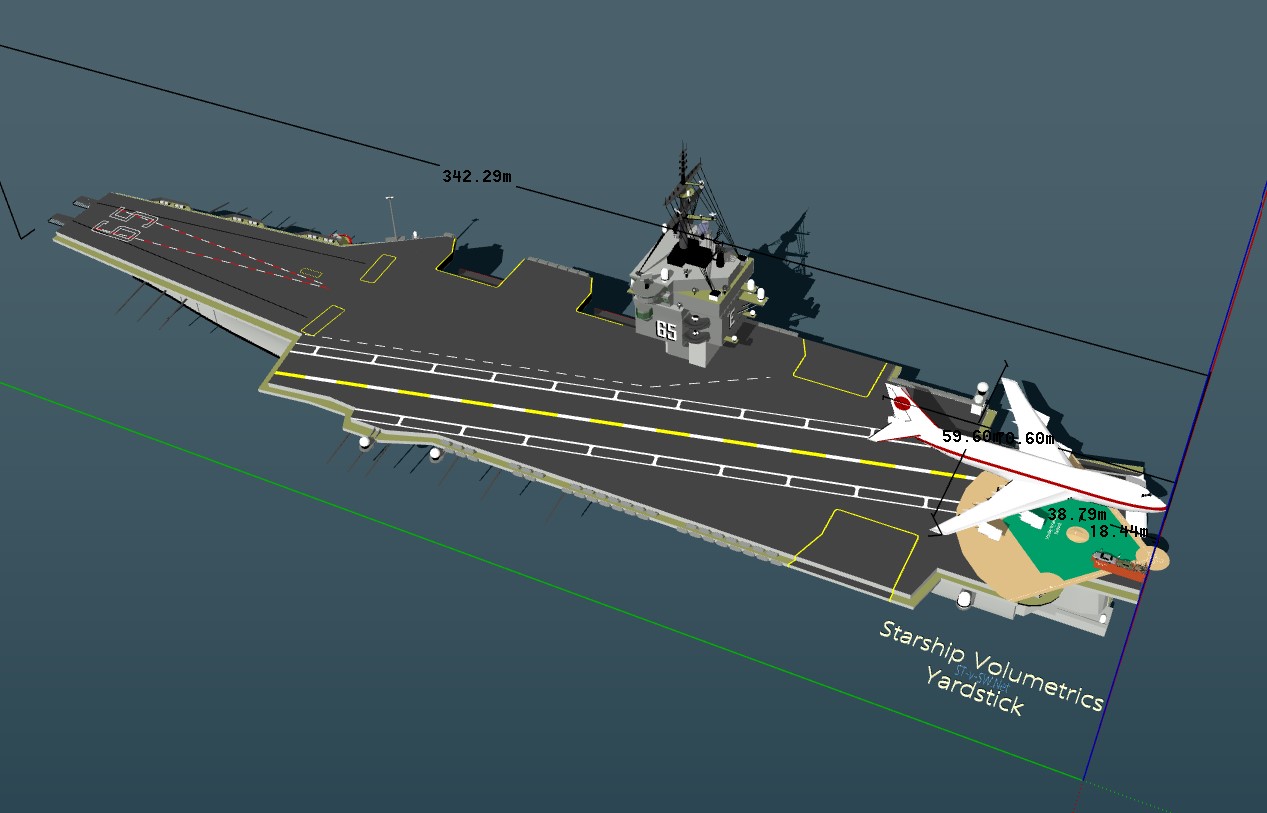 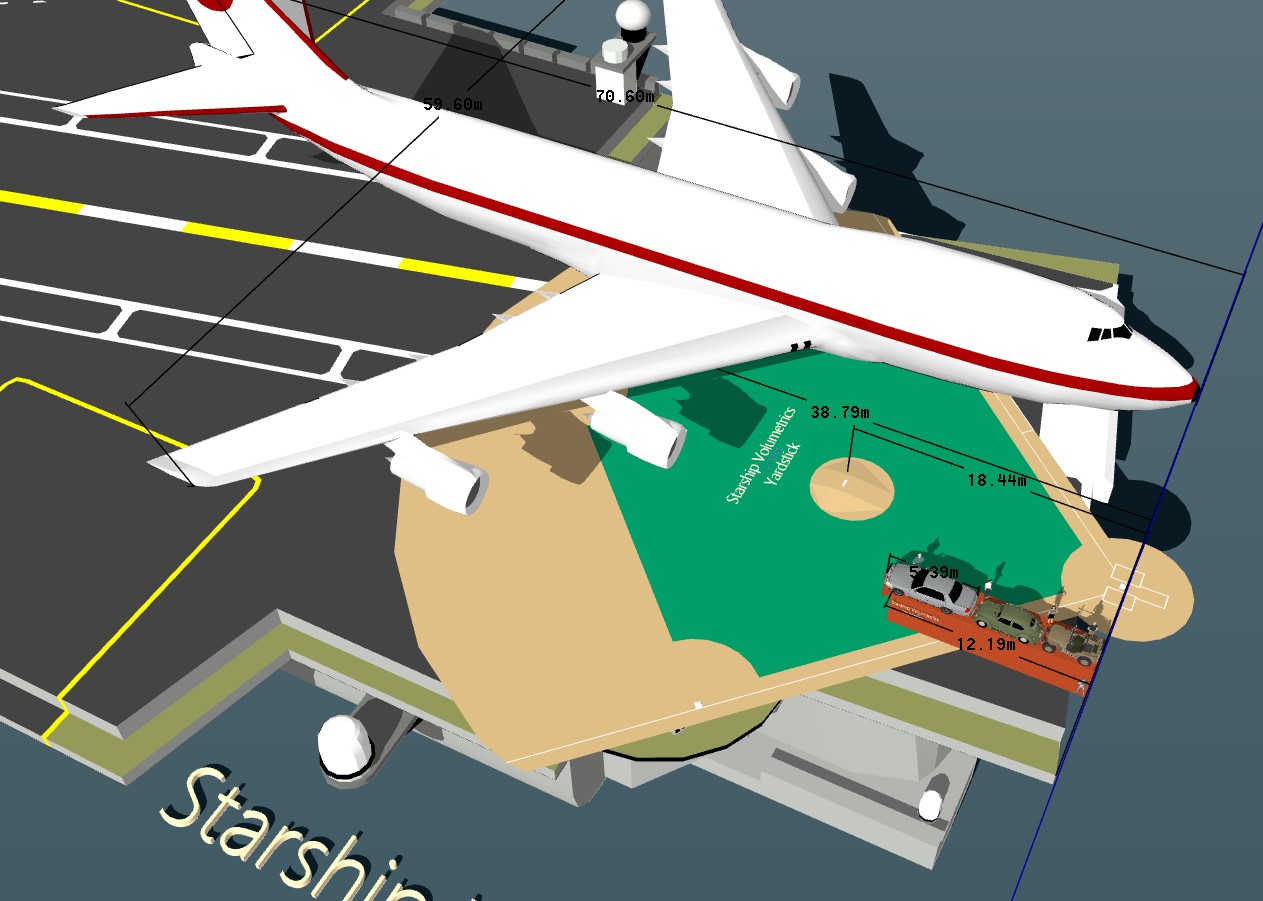 I wasn't sure where to go from the 747 for scaling reference, nor was I sure I needed to.  Beyond a certain size, one may as well just stick with the academic yardstick of a reference to meters.   Even multiple 747s nose-to-tail just gets mentally messy, fast . . . even if you conceive of it properly, it just isn't a thing that you can experience directly.

However, I still wanted something in the hundreds-of-meters range, even though that really exceeds the realm of things that can be approached and experienced, broadly speaking.   The problem is that there's very little of that size that's not some object in a fixed location.  Cruise ships exist, of course, but they come in various sizes.   ​I could've used something like the Titanic, what with assorted museums and such with recreations to scale, but of course Cameron's subscale model for the movie messed up people's perceptions otherwise.

I finally settled on the Enterprise, CVN-65, on the grounds that it would serve, not as a tactile yardstick, but merely as a conceptual one, a comparison against a real floating city.   The baseball diamond is hanging off all kinds of ways, just to maintain the idea of keeping everything against the point of home plate.

But literally as I write this, it dawns on me that I'd been aboard an aircraft carrier before . . .

Upon further review, I'll be replacing the Enterprise with the Essex Class.  I've been aboard one, and it appears that a total of four of them are accessible for tours in the United States . . . two on the east coast (Intrepid and Yorktown), one off Texas (Lexington), and one on the west coast (Hornet, not to mention the larger Midway).   It's not the worldwide accessibility I would prefer, but it'll have to suffice . . . adjust to your own nearby-ish big ships or land features as appropriate.

(Across the Atlantic, for instance, HMS Warrior and the Russian cruiser Aurora are about half the length of an Essex . . . HMS Victory is the length of the 747.   Britain's strong maritime tradition appears related to a large number of museum ships, so feel free to shop around.)

Seriously, though, at some point it really will be academic . . . to an extent, anyway.   I can stand on Earth but that doesn't mean I really mentally grasp the size of the thing in any functional way.

Hopefully, that should suffice.  In my next post, I'll share some fun I've already had with this setup . . .