I seem to have discovered a gaping hole in all the Trek tech geekery currently available online.  But, to be honest, I'd forgotten this existed, too.

For many moons now, my memory was in error . . . for some reason I thought that when Kirk and the gang were skulking about in the US Air Force base in "Tomorrow is Yesterday", that Kirk had merely grabbed a local flashlight.   In my mind I can almost see the corrugated metal of an old incandescent Ray-o-Vac Sportsman or EverReady Captain in his hand . . . about three D-cells for the size of it.   I'm guessing this came from watching some low-res version ages ago and interpolating the pixels as best I could, or maybe it was his brief stop by some random display case and a chuckle, but in any case I queued up the episode the other day amidst a flashlight kick, hoping to identify the now-antique, and blammo, my mind was blown.

Even on super prop sites that can track when a communicator prop got damaged when Takei grabbed it without its consent, there's zip-zilch-zero about what Kirk was actually carrying. 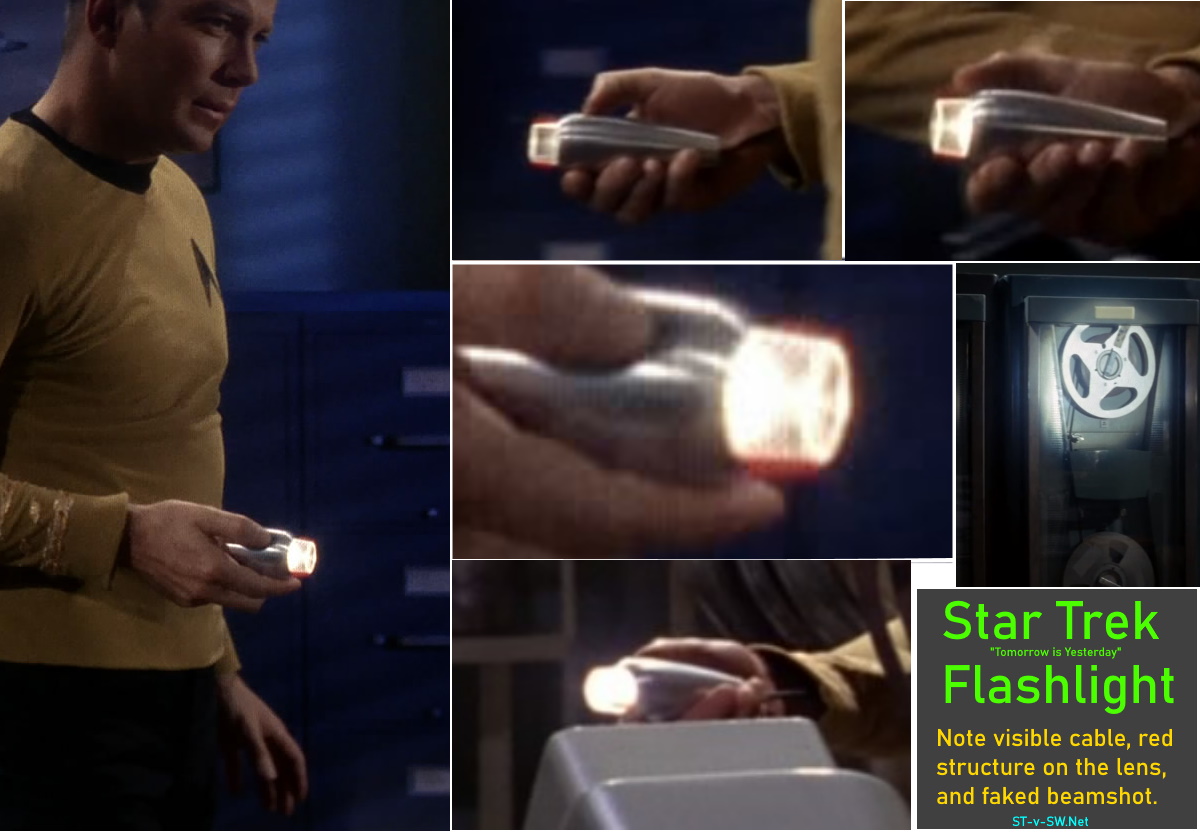 Of course, part of this is that it's relatively uninteresting compared to other props.  The design is somewhat dull . . . it's basically (almost exactly) a smaller version of LaSalle's signalling device from "Squire of Gothos", which is also Kirk's viewscreen fix-o-matic from "The Doomsday Machine), but without the spiky stepped clear part and instead with what may as well be a clear version of a modern plastic soda bottlecap on top.  There are no apparent controls, though there are two red lines that appear to be three-dimensional (i.e. not mere paint) linear structures along the side of the 'bottlecap' lens, which we can assume may rotate for settings.  Underneath that is what appears to be an aspheric (convex) lens for the actual light.
The faked beamshot using a spotlight or similar is well-done, and such a tight spotlight would be a good choice for stealthiness if you're going with a light rather than some sort of light amplification technology (e.g. night vision).   Of course, literally nothing else was stealthy about the landing party, including the officers beaming down in their plain gold duty uniforms with shiny material on them, with no apparent sensor support from the ship, not to mention a flashlight with what today would be a wildly unusual amount of side spill from a 'bottlecap' lens seemingly dedicated to the purpose (which, of course, it was, to ensure that the audience understood a flashlight was in use).   Contrasted with the classic Orilux WW1 and WW2 flashlight's low-observability features, however, this light seems a tad odd.
(They didn't even bother to use a tricorder to detect the basic electronic indicator of door openings and such, meaning they got defeated by the 1960s equivalent of a modern home alarm system.  Compare this to Enterprise, wherein Archer and team boarded a stealth ship with sensor support from the NX Class ship ("Shockwave, Pt. I"(ENT1)), and Archer's scanner could defeat a 20th/21st Century car alarm ("Carpenter Street"(ENT3)).   Kirk was being curiously amateurish.  But, I digress . . . )
I decided to have a little fun with the whole thing over on Reddit's /r/flashlight subforum.  I ended up just making up some specs myself, for kicks, the the style of one of the flashlight enthusiast review sites . . .
************************************
*With apologies to 1Lumen.com, I found a light to review myself.   Please note that this is just a "quickie" fake write-up for fun . . . I did no refresher research and no math (not that doing both wouldn't have been fun, just time-consuming).  The below is thus laden with little more than scientificalisms, technobabble, and handwavium, with made-up bits like the tail-switch where, in reality, a poorly-hidden power cable existed.*
1. Starfleet Flashlight (2267)
2. Build Quality
3. Emitter and Optics
4. Size and Comparison
5. User Interface
6. Power Source
7. Performance
8. Beamshots
9. Final Verdict
**Starfleet Flashlight (2267) Specifications**