In case you hadn't noticed, one of my interests is flashlights and other lighting technology, and this is something that sci-fi usually gets very, very wrong.

In fairness, it's hard to get it right.  After all, unless you actually have uber-flashlights, then you have to engage in a lot of expensive fakery to make it look like you have them.  Well, really, that's only true in live-action scenarios . . . you'll note that in TCW, a CGI show, flashlights and weaponlights still suck.

Well, this "tiny monster" would be a good start . . . handheld and 3500 lumens.   Of course, in the not-terribly-distant future, we would expect the whole thing to be truly pocket-size, or even a pen-light with that output.   (At some point they'll be regulating them.)

Bear in mind, though, that there are caveats.   Remember from my recent posts that sometimes we have to consider valid reasons for things not to be quite as awesome as we might expect?   Well, this is especially true of flashlights.  Just because a flashlight seems a little dim in certain scenarios doesn't mean it actually sucks.

For instance, if I'm breaking into your house and it's dark, I don't actually want to have a super-bright light on my weapon, because as soon as I hit a bright or reflective surface my capacity to see just went to crap because I've virtually flash-blinded myself.   And one must also consider that if for whatever reason the light goes out or is knocked away or something, I don't want to be completely blind . . . that is to say, if the ambient lighting is dim, I might only want a flashlight bright enough to allow a bit of extra visibility but not so much that everything's pitch dark to me as soon as my light goes away. 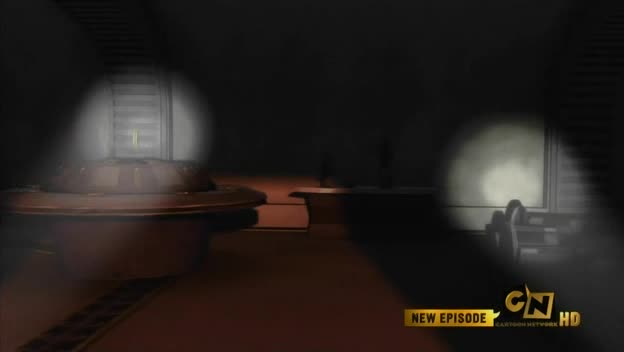 This is part of why some weaponlights feature diffuser attachments, too . . . the basic idea being that instead of a concentrated beam of light, you want to aim for more of an area light.  This is very good kit.   Consider the image from TCW 122 where the Senate's gone dark and an assassin droid and a Weequay are skulking about.   The image shows the droid's headlight on the left and the weaponlight of the Weequay on the right.

This is horrible.   Were it not for ambient light, it doesn't look like they could even see if someone was standing on the table with a gun.  And note how the weaponlight's beam center virtually whites out the wall?  That's not so good, either.   They'd have done a lot better to put panty-hose on their lights or something.

However, they are consistent with R2-D2's little searchlight from AotC when he was guarding Padme's room.   At least then we could suppose that he was aiming for a dim and conical light to avoid waking Padme by emitting THE SUN at her, but in this case we have no such excuse.

Star Trek has a ton of similar examples, some of which are equally inexcusable.  Some of the best lights come from Enterprise, actually, but even there with their big 1950's-looking metal flashlights we still don't see the output of something like the "tiny monster" even when it would be helpful.

Put simply, it's just a fact of science fiction, and indeed the rigors of television in general.   There's an awful lot of thought put into myriad details (such as the contents of that room, the color of the emergency lighting, et cetera), but often not as much as we, the fans, put into all the other details that don't get the same amount of thought.

(And with Star Wars now going with a unified canon where even short stories from Insider that aren't spell-checked are to be canon, this is only going to get worse.)
Posted by Guardian at 9:55:00 AM

So I called it "Flashlights Again" because I was sure I'd gone on at length about flashlights before. But, as it turns out, I had only threatened to: