Smoking Pots and The Holy Grate

Just a quick note . . . I'm working on a full big long page on the topic, but in case you were not aware, there's "The Holy Grate" issue.  Basically, when Leia shoots the grate that leads down to the trash compactor on the Death Star in ANH, everyone in the universe just rolled with it . . . except inflationists, who have argued . . . and I kid you not . . . that the grate was cast iron because:

There's a lot more to the Holy Grate arguments, but that'll do for the moment.  But, suffice it to say that they wank it out in every conceivable fashion in an effort to give Star Wars hand weapons greater firepower (in raw power and in effect) than Star Trek people-pooc'ers.  (Who cares?  It isn't like they're gonna hit anything with them anyway.)

So on to the quick note:

I wasn't there to witness it, but I'm told a PC under a desk started smoking and, within just a few seconds after the smell produced worry, a six-foot wide column of haze was created from floor to ceiling, leading to someone quickly unplugging things.  The fire department was even called, I'm told.

What was the cause?   Well, it seems a SATA power cable and an optical drive had some sort of disagreement.   Not to worry you, but if you have an even slightly recent computer, you have a SATA power cable in it.   I later got a chance to examine the PC and take some pictures. 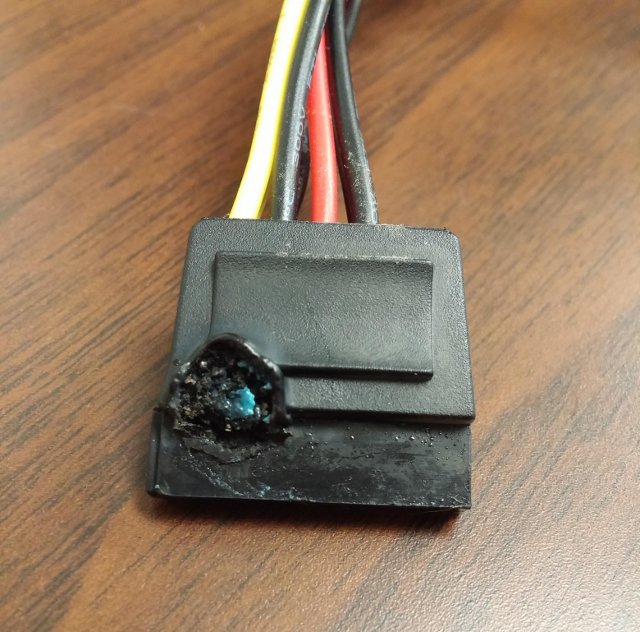 That's the SATA power connector.   Bear in mind that the width of this thing is like an inch or so.  What seems to have happened . . . which per Googling is not as uncommon as one might wish . . . is that the assorted little skinny contacts for the 12v power somehow had an issue, whether due to the optical drive having a problem or just because the little wires are too skinny for the amperages available. 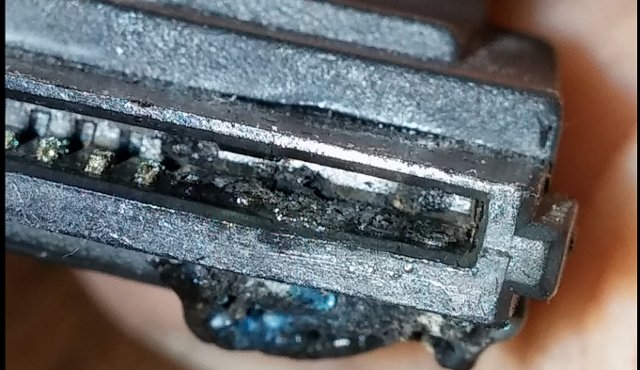 As you can see above, those little contacts are missing.  Below is the damage to the optical drive itself . . . deadly to the drive, but minimal, and there was no internal damage that could be seen: 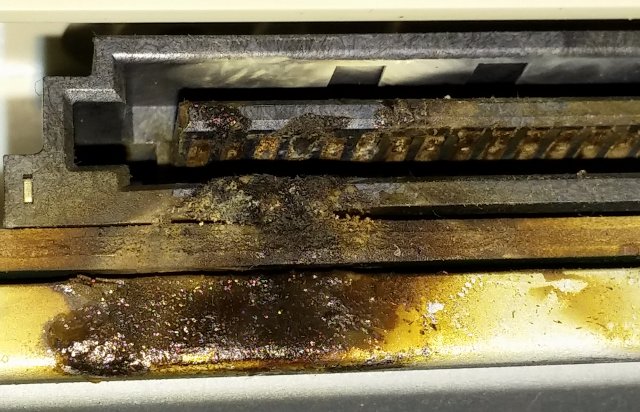 It occurred to me just a few moments ago after seeing what oddball antics Brian Young was up to this week . . . yet another video on the Holy Grate entitled "Pots and Kettles" . . . that this event was a teachable moment for Vs. Debate purposes.

Note that the SATA connector is black.  Note also that plastic is common (and weight-saving, which we know to be important in Star Wars vessel construction).  Note also that the connector has a mottled texture.  And, note that  . . . aw crap, it wasn't in a jail.  Nevermind.   I concede that point.

Still, though, the inflationist religion requires us to believe that a bunch of Leia-wrist-thick bars were considered necessary to secure a hole leading to a trash compactor.  That's odd since we don't even make prison bars wrist-thick, but whatever.  And then there's the whole magic of how molten iron is supposed to cool enough in ten seconds not to ignite Chewbacca's hair, but whatever.

More importantly, a tiny pencil-eraser-width of vaporized and melted metal and plastic was sufficient to produce a column of hazy smoke six feet wide in real life . . . and the smoke produced by the grate was similar, lazily rising next to Han and no different than any of the other blaster hits that made big puffs of smoke against everything from people to cameras to walls. 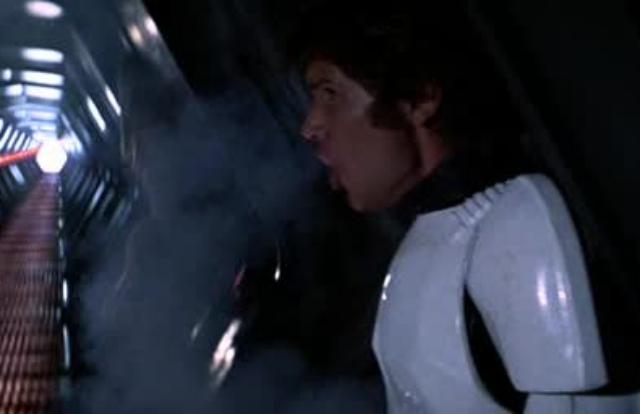 Think about that . . . the inflationists would have you believe that the Holy Grate represents the vaporization of several liters of metal . . . and yet it produces no more smoke than maybe an entire milliliter of plastic.

Y'know, solids are solids because there's a helluva lot of stuff there.  Indeed, if you want to figure the expansion of a solid into a gas, you usually have to assume expansion of hundreds of times the prior volume, because solids . . . unlike gases . . . are dense stuff.   Dude, where the hell is all the stuff?    I mean, even 500 times the volume times "several liters" is, assuming seven liters like they claim elsewhere, at least 3500 liters.   That's 3.5 cubic meters (123 cubic feet) of gas to suddenly and explosively deal with.

No, that's not "an area of smoke rising in the air" we're talking about.  This is a huge volume of extra air.  We would normally call this blast . . . where the hell is it?  We're talking about a sudden presence of an area of gas the size of Leia * Leia * Leia in length and width and height, in addition to the existing air.   I don't see it.  Do you?

Fear not, the inflationists have wished it away!   It all flies down the chute, silly-billy, even though we can just watch some of the smoke go lazily down the chute and it isn't thousands of liters worth.

There's also the fact that the top parts of the grate wobble when Han jumps through, which I would go so far as to say is a decidedly-un-wrist-thick-cast-iron thing to do.

I guess his foot must be made of neutronium.

Anyway, the way I figure, at best this thick grate was made of carbon, if we're gonna play the "black and common" game.  But really, I don't even think that's a logical necessity.  I'm perfectly content with it being any old thing . . . after all, it isn't like it really vaporized.  The bar fragments are clearly seen on a trajectory down the chute. 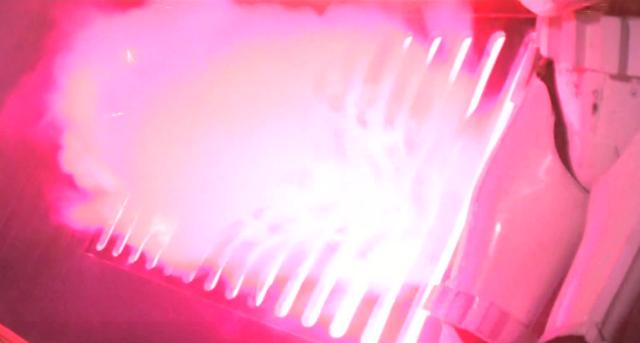 So, inflationists, make it whatever you like . . . I'm fond of hydrofoamed permacrete myself . . . just don't try to wank it anymore.  Much as I enjoy a good debate where I hold all the cards, I'd really love to not have to finish the big-ass page right now.   It does, after all, take time to do things properly, as someday I hope you guys find out.
Posted by Guardian at 7:30:00 PM